The day Bob Gibson's stardom began (in my home town!)


Not many years ago I accidentally stumbled into some 1958 pictures of Red Wing Stadium in Rochester, New York. They had nostalgic value for me because that stadium was within walking distance of my home, and was the first place I ever saw a professional ball game. The stadium in the photos looked exactly like the stadium in my memory. That was the first year I ever followed a baseball season, after the 1957 World Series had lassoed me into the ranks of fandom. 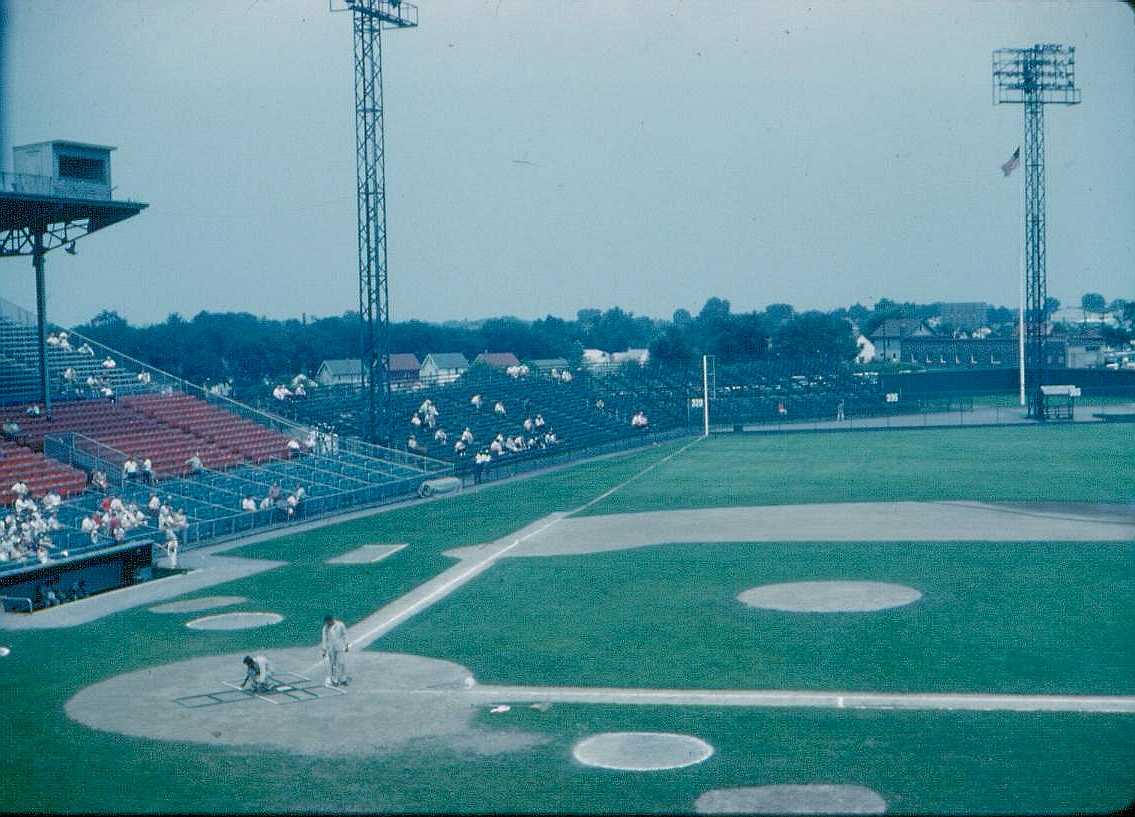 The stadium during pre-game prep. 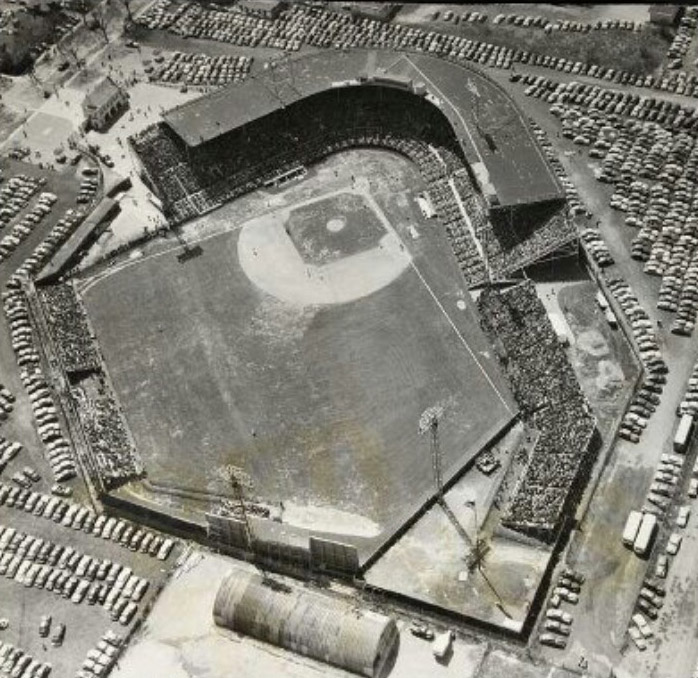 An aerial view from the same era. The right field bleachers are temporary (overflow crowd).


As I looked at the color pictures above and below for a third or fourth time this year, I started wondering if I could find out precisely when the pictures were taken. Given the clues from the scoreboard and a bit of time travel through the Rochester newspapers, it turned out to be possible to pinpoint the game, and wonder of wonders, it turned out to be a significant game, perhaps not in the cosmic sense, but in the career of a future baseball superstar, Bob Gibson. 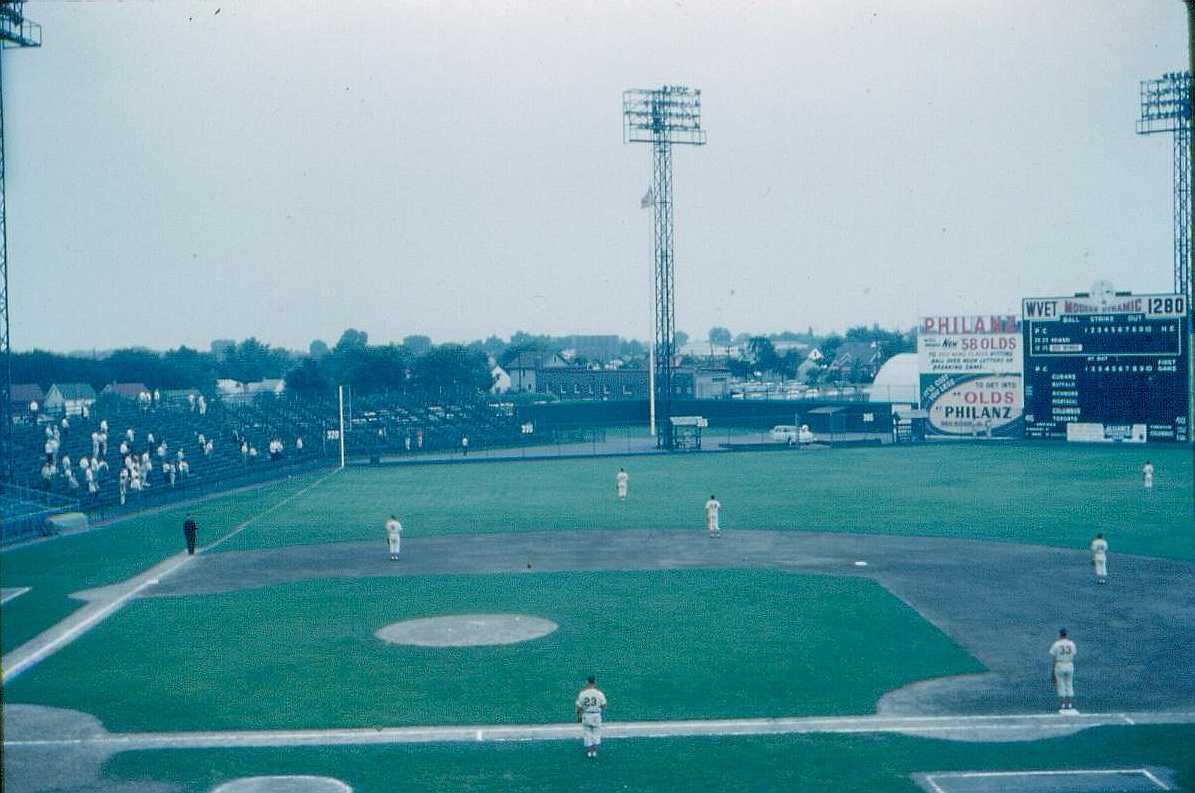 On the field for the national anthem that day (pictured above) for the home-town Wings were:
I can't identify the first base coach, #23 in the picture. I did manage to find a Red Wing Scorecard from another part of that season (below), but he is not listed among the coaches. Note that the players named on the scorecard and the players in the picture do not correspond one-to-one. Minor league rosters are very fluid, so the Rochester uniform was worn by some 51 different players that year, plus the manager and an assortment of coaches. 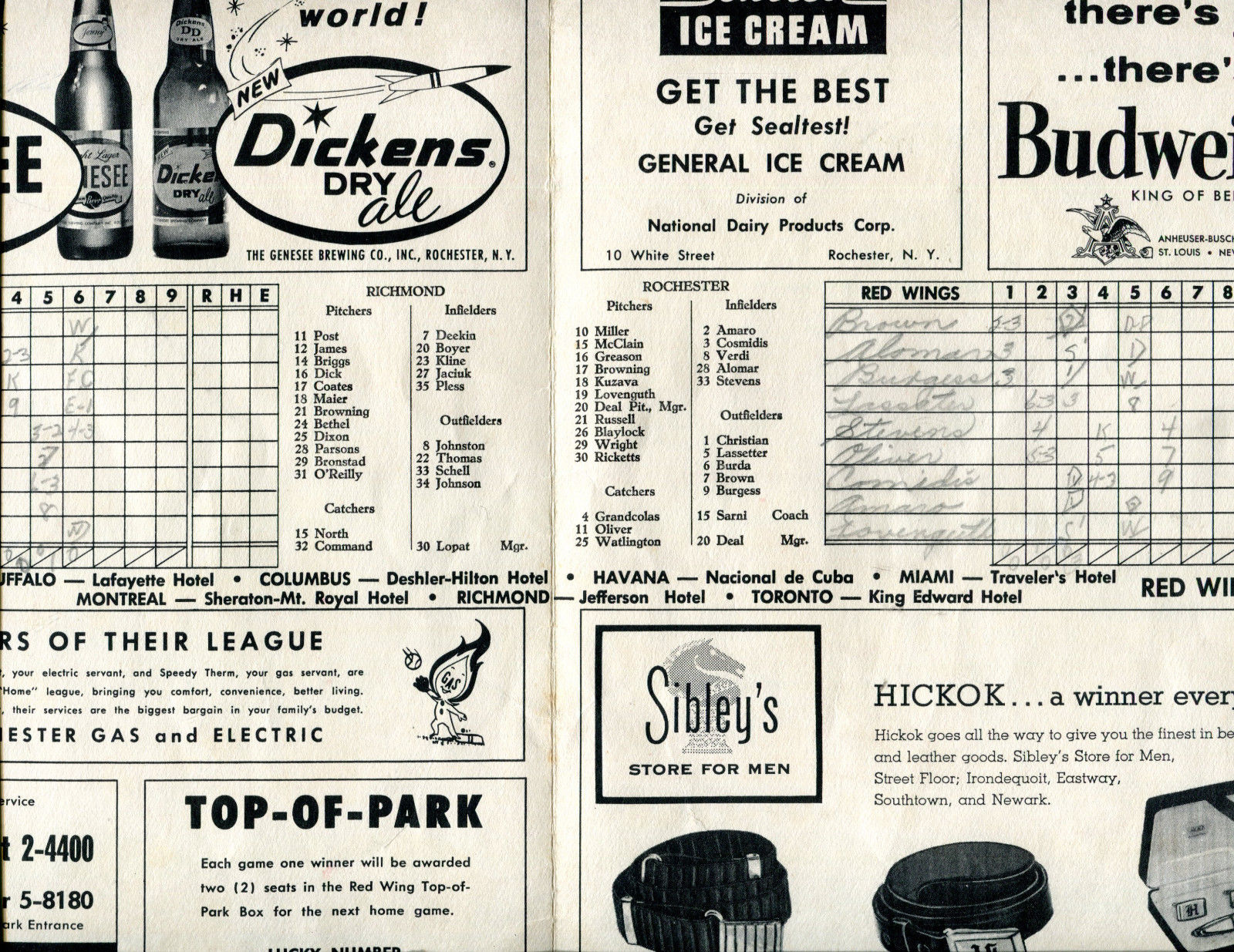 The players not pictured are the catcher and right fielder.

The catcher that day was Neal Watlington, who was Gene Oliver's back-up. His major league career consisted of 44 at bats in 1953 with a .159 batting average, no power and few walks, but his minor league career had started back before WW2, and he was still at it in 1958 after serving in a World War and playing more than 1000 baseball games. His only appearance on a baseball card (below) came in the obscure 1952 Parkhurst set of the minor league Ottawa Athletics. 1958 would be his last year and it was not a successful one. The game in today's microscope was one of his few appearances in a season when he batted a weak .169 in 77 at bats. As baseball wag Rocky Bridges might have noted, Neal was in the twilight of a mediocre career. 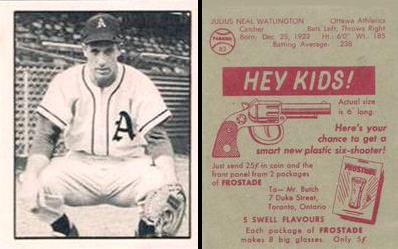 The right fielder was Canadian Tom Burgess, one of the truly reliable players in the International League of the fifties. You could just about pencil him in at the start of the year to hit .280 with 20 homers, as he did for a half-dozen seasons in Rochester and a few more here and there for other AAA teams. He had pretty much that exact same AAA season every year from 1955 to 1961. That's a level better than 99.99% of male human beings are able to achieve, but is not quite enough to earn a spot on a major league roster. He got 21 at bats for the 1954 Cardinals, failed to impress, and then toiled away in the minors until the major league expansion in 1961-62. He was a 34-year-old rookie by the time he got a shot with the 1962 Angels, and he never got any traction going, although he did post a respectable .354 on-base percentage. The Angels cut him after that season, whereupon he picked up 28 more at bats in the minors, then retired. Like Frank Verdi, he was a minor league manager for about two decades (1969-1987), some of that in AAA, but never got the call to the Big Show. He is in the Canadian Baseball Hall of Fame. 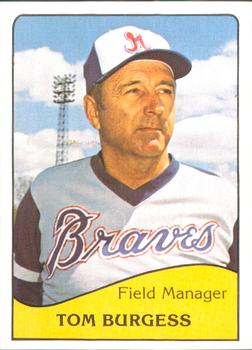 With all the experience and knowledge on that team, you might think they were an International League powerhouse, but the truth is that they were about a .500 team, a typical AAA squad of the era, consisting of players who had been solid major leaguers, but were past their prime and unwilling to give up baseball, mixed in with guys with major league potential who had not yet reached it, some other guys like Verdi and Watlington who never got more than a cup of coffee in the bigs, and even a few guys (eleven of the 51 who played at one time or another on that 1958 squad) who would never make it into the majors at all. 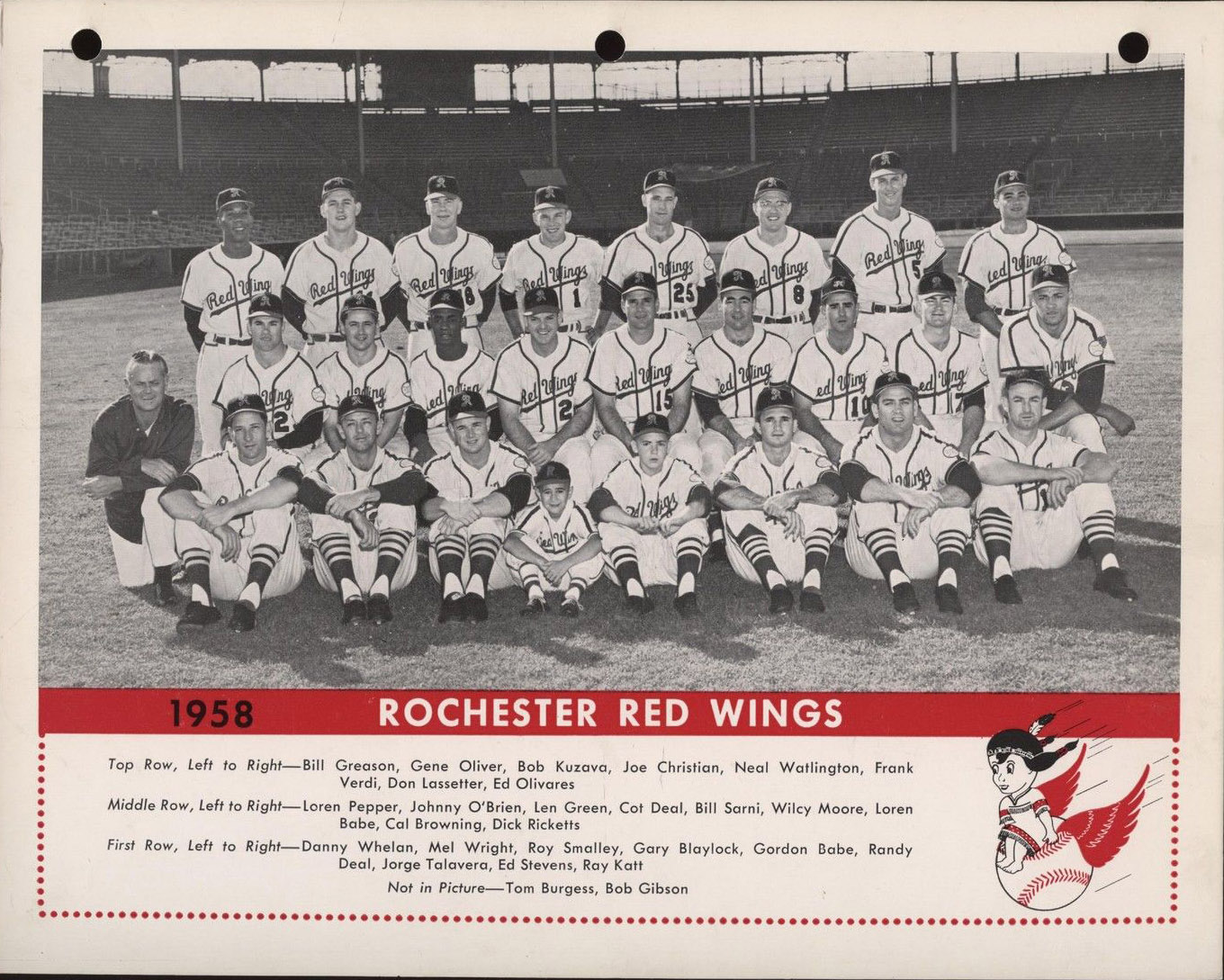 The starter that day, August 3rd, was not Gibson but Lynn Lovenguth, a guy who genuinely seemed to have major league talent, but had a minor league temperament. He was the International League's perennial problem child who would end up spending twelve years in triple-A ball with eight different teams. 1958 was the ninth such year, by which time Lovenguth was 35 years old and bitter that he had never gotten more than a quick look in the bigs. He would be 34 years old before he got a single major league start. His anger may have been well founded, because he had owned the International League in 1955 and 1956, finishing the latter year with a 24-12 record, and leading the Toronto Maple Leafs to the IL pennant. (He's pictured below during that triumphant season). That marvelous season earned him nothing more than nine innings of major league ball in 1957 before he found himself relegated to Rochester, wearing the fourth of the five different International League jerseys he would sport during his career. He would be in Rochester again in 1958, where today's story takes place. 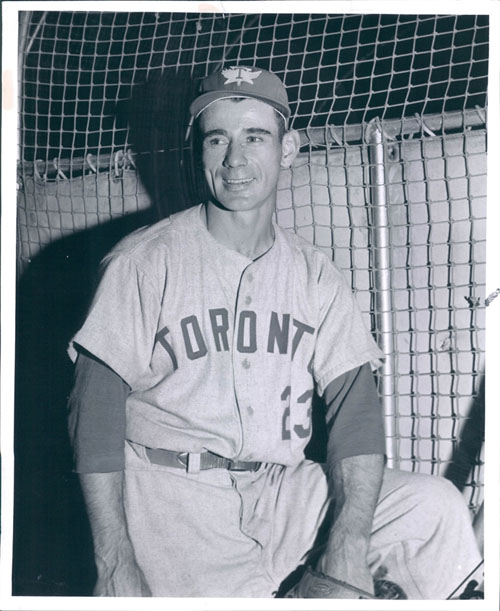 After the first inning of that particular game, Lovenguth was complaining about and arguing with his teammates because they had failed him defensively. Manager Cot Deal had been tinkering with the line-up because his team was scoring fewer than four runs per game. His best hitter was his young catcher Gene Oliver, a future major league regular then hitting .292 according to that day's paper (left), who was scheduled for a day off from his duties behind the plate. Deal needed Oliver's bat in the line-up, so he stationed him in left field where the displaced catcher promptly made an inappropriate throw in the first inning. When Frank Verdi contributed an error of his own in that same inning, Lovenguth blew his stack. The pitcher was correct to believe that he had received poor defensive support, but carping about it in the dugout has always been and will always be a no-no, so manager Cot Deal told his malcontent to shut up or get fined and go home early. The prickly Lovenguth chose to go home.


This, of course, left the manager with no pitcher, and nobody warming up. Enter the future superstar Bob Gibson, then commonly called "Hoot" (after the famous Western star), who at that point was still sweating from his pre-game running drills. 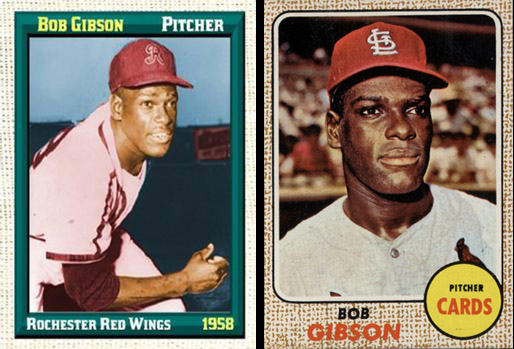 Before that Sunday afternoon game, Gibson had been muddling through his season in Rochester with an undistinguished 0-3 record. After four unsuccessful starts, he had been demoted to the dreaded long-relief job, but that turned out to be just the role which allowed him to make his first mark in AAA ball on that August afternoon. He took the ball in the top of the second and went the rest of the way, winning the game by allowing no runs on only two or three hits (the box score to the right says two, but the accompanying article says three). The Rochester Democrat and Chronicle headed the box score with the phrase "Hurrah for Hoot."

To make the day even sweeter, Gibson did not just best any ordinary minor league pitcher. On the mound that day for the opposing Miami Marlins was a pitcher who some say is the best of all time - the legendary Satchel Paige! 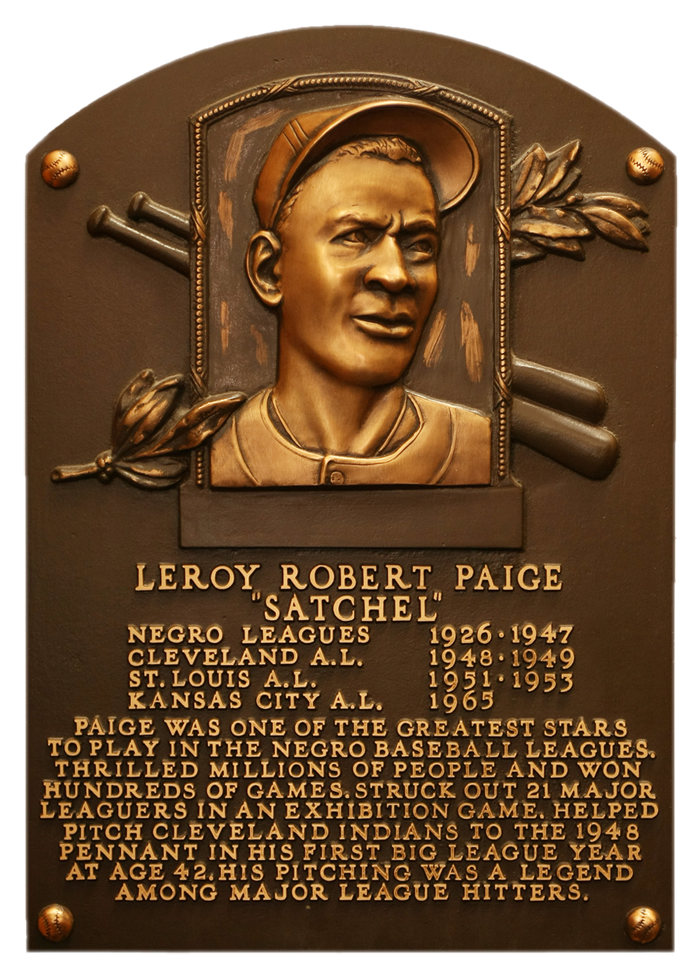 Red Wing stadium looked about the same in the late fifties and early sixties as it had when it was first constructed in 1929, and nearly identical to its appearance in the 1930s, when a bullpen was created behind the left field fence. That fence had no ads, but was a wire fence which permitted everyone in the park to see through it. My dad and I saw essentially the same park when we were nine-year-old boys, 28 years apart. The only substantial change from the thirties to the fifties involved the fence separating the field from the bullpen, which originally had a jog in it, to be replaced by a completely straight line in the 1950s. This .pdf file details the changes in the dimensions and angles, and the aerial photograph below shows the fence as it was before the jog was straightened. (Compare that to the aerial photograph in the main body of the story above, which shows the straightened version.) 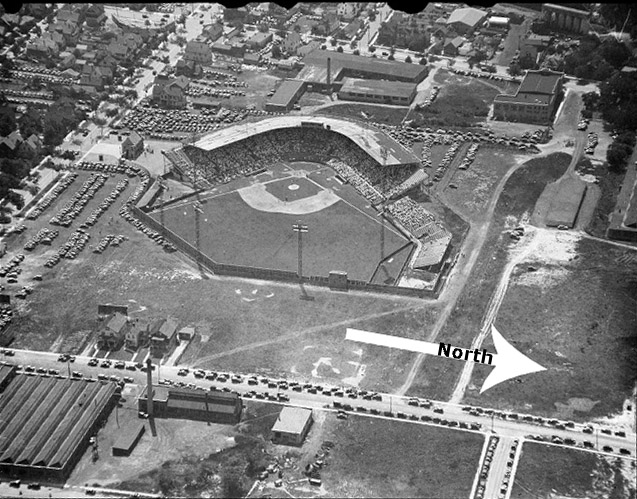 The economics of minor league baseball being what they are, the beloved see-through fence, which allowed generations of fans to watch majestic homers bouncing on the grass or rattling around the bleachers, was eventually plastered over with ads, and then topped with two additional levels of garish ads (see below). The iconic scoreboard, manned by actual humans carrying giant numbers into inning slots, was also the victim of budget cuts. While my father and I could view the same park when we were the same age, my sons and I could not. As Deep Throat sagely advised, the management followed the money. They had no choice. That is the reality we live in now, which is no longer the world we once knew. 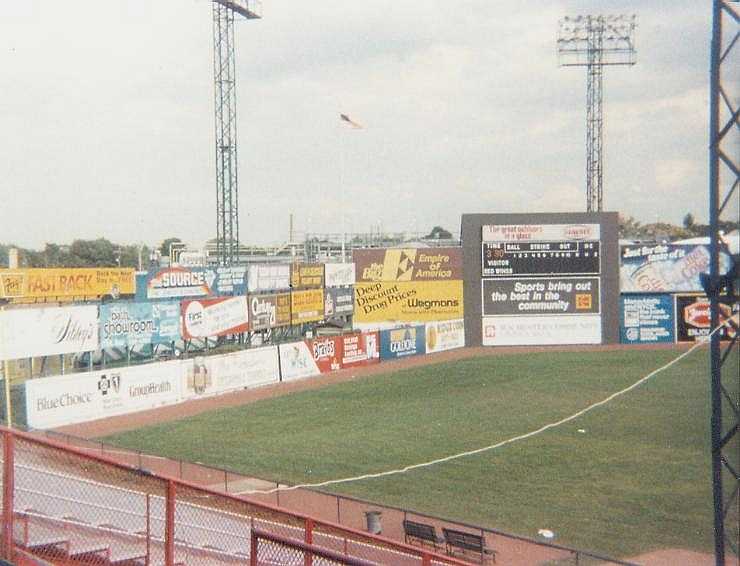