The Legend of Danny "Suits" Sparrow

... the only white man in the Negro Leagues.

"Suits" is my dad, whose recollections proved that he must have been the world's greatest athlete. He's been gone now for more than a decade, and it was difficult to see his greatness in the later years when he was 80ish because when we'd play one-on-one basketball he sometimes had to resort to blocking my shots with his hands, instead of with his feet, as he claimed to do in his prime. Allegedly barred from major league baseball because of the damage he would have done to its competitive equilibrium, he played out his entire career as the only white guy in the poorly-documented Negro Leagues, or barnstorming with the Washington Generals basketball team, the patsies who play against the Harlem Globetrotters. 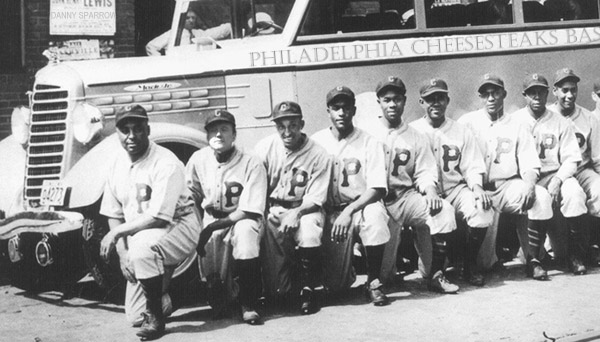 Here is a picture of Danny with his greatest team, the legendary 1935 Philadelphia Cheesesteaks.


Today his feats are little remembered or recognized, since the Hall of Fame, in a bizarre twist of double reverse discrimination, now admits players from the Negro Leagues, but not if they were white. We have only his words to remember those glory years:

I remember the day I was playing catcher for the old Boise Networks against a major league all-star team, and Cobb tries to steal on us. Pulls it off twice, because we don't have an infielder that can hold on to my throws. So when the bastard takes off a third time, I just catch the pitch, out-run him to second and tag him out. Had to kick his ass, too. They tossed me out of the game, but it was worth it to see him cry. Good thing for him I was only 9 years old then.

There was the day I got my nickname. I'm playing for the San Francisco Treats and we're playing an exhibition against the Dodgers at Ebbets Field. They have this sign in the outfield, from some tailor named Abe Stark, that says "Hit this sign. Win a suit". That day I go 5-for-5. Five at-bats, five suits. Hell, I mean it was a big sign. So this Abe finally says he'll make me a suit anytime I need one if I just stop aimin' for the sign.

We didn't get paid much then, so we would play exhibitions, take up a collection and split the take. Didn't care much for money anyway. Not like those guys today. Just played for the love of the game. And the love of suits.

One of the most famous exhibitions was the time they staged a race ... me against light. Sorry to say I lost my supporters a bunch of money that day. I still think I coulda won if I hadn't gotten such a big lead. I got cocky and stopped at Denny's for breakfast, and dammit, I'da still won if I had the regular breakfast instead of the Grand Slam.

Got so everybody knew me in every Denny's, cuz in those days all ballplayers used to carry 365 different ID's on the road, with one for every birthday. That way, we could always eat free at Denny's. But after a while, I stopped going to a different Denny's each time because all the Denny's employees knew it wasn't really my birthday, but they give me a free meal anyway. After a while it becomes a joke. I walk in the door every day during a homestand, and every employee winks at me, and says, "Happy birthday, Danny". After about a year some reporter gets aholt of it, writes it up, and then everybody I meet everywhere says "Happy birthday, Danny" to me every day instead of "Hiya". In 1942 we're playing an exhibition to sell war bonds, and Roosevelt is there. I go up to ask for his autograph, and he signs it, "Happy birthday, Danny. FDR".

I forgot there wasn't any Denny's back then. It was another chain that run the same birthday promotion.

Man I used to hate to go down to New York and play our road games against the Staten Island Ferrys. Those guys had a different way to tag you, if you catch my drift.

Back in 1937, I'm on the roster of the Niagara Falls Slow Turners, and we're playin' an exhibition in the Polo Grounds against the Giants. Hubbell fools me a bit with the screwball, so I get on top of the ball, and I only hit it for a ground rule double. Well, you shouda seen the crowd. They break through the security and carry Hubbell around the field on their shoulders for a good half-hour. Hell, it didn't make no difference in the game, but they just loved King Carl there.

That Havlicek could play some D. He made the two best defensive plays I ever seen. Everybody knows about "Havlicek stole the ball", but not many folks remember the time he was guarding me and forced my shot to hit the rim on the first play of the game. Oh, sure, the shot went in as usual, but the crowd was stunned into silence for about a minute when they saw it graze the rim. The ref stopped the game and asked Havlicek to autograph the ball. Lookin' back on it, I sure wish I had made it to the game on time so I didn't have to go out for the opening tip in my socks.

Luge ... sure.... pretty good sport. I used to like doing it until they added that sissy little sled.

I'm all for this Casey Martin kid. Let 'im ride. Back in '39, I broke both of my legs and they let me play in a wheelchair. Hurt my game plenty. Still could hit pretty fair, but I couldn't steal second after the intentional walk. I'm playing for the championship of the old Negro Double-Name League for the Birmingham Elite-Giants, and that day the Chicago Style-Pizzas beat us by 3 when they walked me with the bases full to get to Josh Gibson.

I wouldn't have played in the majors even if they had let me. Can't see playin' no place where they won't let you smoke while you're pitchin'. Some days, ol' Satch would go through a carton of Raleighs out there. Saved up and bought himself a Doozie' with the coupons.

Ruth, Schmooth. How could a really feared hitter hit 60 homers in a year? The year I hit 47 for the Philadelphia Cheesesteaks, I only had 48 official at bats. The rest of the year I had about 650 intentional walks and a ground rule double, and the home fans in Philly booed me for ten minutes when I hit the double. That was my famous 467-foot ground rule double into a gale-force wind. The umps figured it caught the deepest part of the centerfield corner at Shibe Park, then bounced over. Lotta folks say it cleared the fence on the fly, but it was late in the afternoon before the park had lights, and it was dark out there, so the umps never got a good look. The fans was pretty mad at me for screwin' up, but I calmed 'em down by takin' a pay cut after the game, even though I stole third and home after the umps ruled it a double.

And what was the big deal about Ruth making promises to crippled kids? We all did that in them days. One time I'm playing for the Morgantown Rides, and I visit a sick little Dodger fan in the Brooklyn Children's Hospital. The kid's health was fallin' apart because he was so afraid that I would clobber his home town heroes, so I promise the kid that I'd strike out four times and make a couple of errors so the damn Dodgers could win the big exhibition game. And I deliver everything according to plan, but the little bastard died anyway. Man, kids are ungrateful. The story does have a happy ending, though, because I laid down four large on the Dodgers at 2-1. 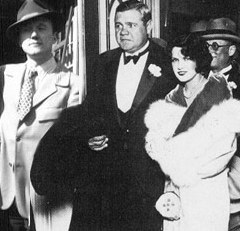 But the Babe and me, we always got along well on the field and off. The big lug and I always fought and always forgave each other, and I even had Abe make him a nice suit once't.


Here's me, Babe, his Mrs. and Abe coming out of Abe's tailor shop. Jiggs and I always had to compete about something, so I guess we drank 50-60 beers apiece while Abe finished off our stitching.

I mean back in them days where else but baseball could a guy like me get to travel the world and meet such high flyers. We played in Japan before the war, and we played in Rome afterwards. The Italians loved us, even though they didn't understand baseball. How can I ever forget when the Pope comes up to me and DiMaggio. I was kinda surprised he doesn't know the Clipper, cuz I thought every Italian knew Joe D, but he just turns to him and says, "Bless you Americans, my son". Then he comes up to me and says, "The lord has truly blessed Italy today. It's a real honor that you chose to spend your birthday with us in Rome, Danny."

Yeah, they were the great times. Play a game in the Apple, then head down to the Algonquin Hotel and get lit up afterwards with F. Scott, Zelda, and Harpo, and them round table people. Dorothy Parker would always find some kooky way to say "Happy birthday, Danny," like a pun in Swedish or something. Some days, Zelda would get depressed, so I'd take 'em all up to Abe's to get new suits, and then she'd be all right for a while. I don't think there'll be another era like that.

This page, of course, is pure silliness, but it reflects fairly accurately the way my dad told his stories, as further embellished by his son and grandsons. As for the real man behind Danny Sparrow, I expanded on my relationship with my colorful, eccentric father in my review of Big Fish, a film which seemed to me almost like a Danny Sparrow biopic.
Posted by Greg Wroblewski at 7:36 PM