Mickey Mantle is the most prized figure in baseball card collecting, in no small part because he was the boyhood hero of so many baby boomers. A 1952 Topps Mantle card, graded PSA 8.5 (10.0 is totally mint), was just sold for more than a million simoleons. Except for the legendary T206 Honus Wagner card, which Wagner forced out of circulation, the 1952 Mantle is the most valuable in the world. This was not his first baseball card and can't properly be called his rookie card, but it was his first Topps card. For the full story, let's look back at the baseball cards issued during Mantle's first four years in the majors. 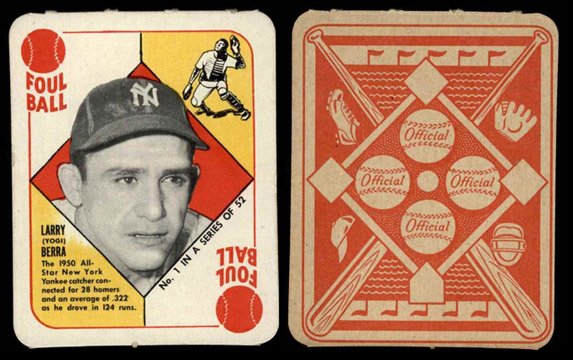 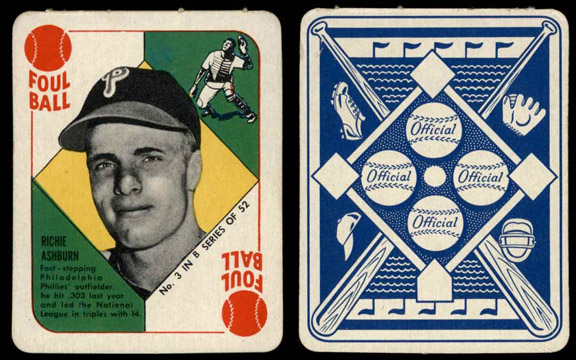 They consisted of 52 cards each, like decks of poker cards, and they were designed to be used as part of a game of table-top baseball. Certain cards were designated as hits, while others were strikes or outs. Mickey was playing for the Yankees that year, but was excluded from the 104-card issue.

There actually is a Mickey Mantle rookie card, but it was not issued by Topps. It was produced by another company called Bowman, which was in the baseball card business three years before Topps and stayed in it until Topps bought them out between the 1955 and 1956 card sets. The 1951 Bowman card was actually Mantle's first baseball card as well as his true rookie card. The Bowman cards came with gum, like the Topps offering, but were a different size. The 1951 cards, illustrated by Mickey's card below, were smaller than the Topps set at 2 1/16" by 3 1/8", but were larger and more elongated than previous Bowman issues, which had measured 2 1/16" by 2 1/2". 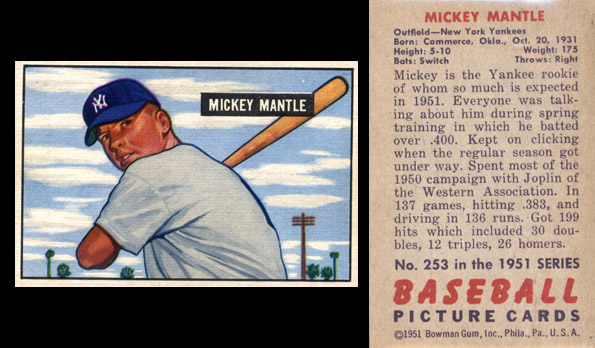 The first Willie Mays card was also in that collection. 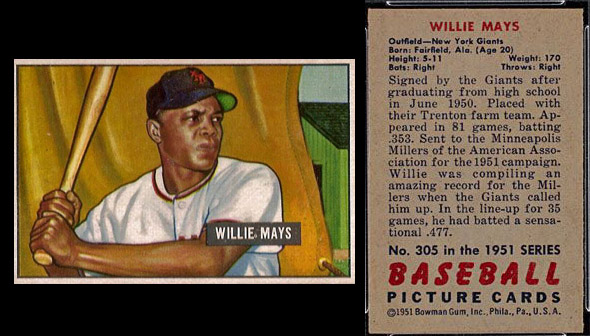 Topps issued its first comprehensive set in 1952. That is really the first set of modern baseball cards, and remains the most popular and valuable set of sports cards ever issued. That set formed the template for just about every subsequent set to this day. They were 2 5/8" by 3 3/4", with a picture, team logo and ID on the front. The reverse contained the card number, stats and brief bios. Mickey's card from that 1952 set is the valuable one. 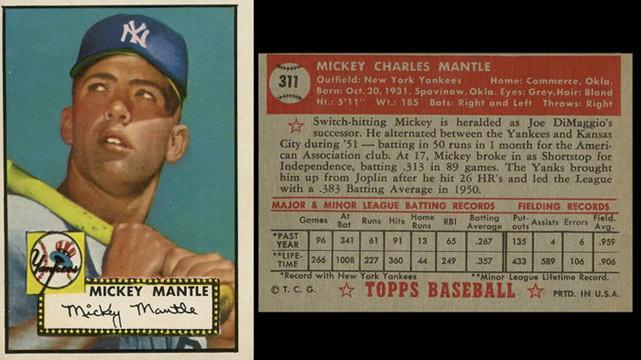 Bowman also issued a Mantle card in 1952, and while they did not use the same image as in 1951, they were still using their basic 1951 size and design, which meant that their cards seemed awkward and primitive compared to the revolutionary and contemporary Topps issue. 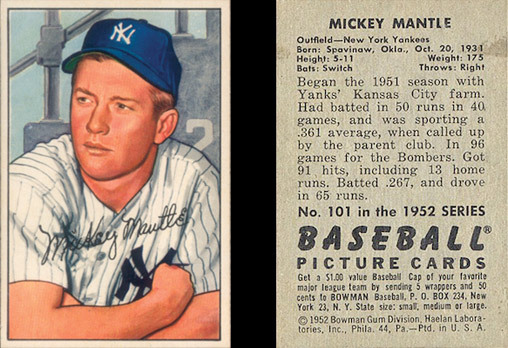 Topps and Bowman were the only players in the bubblegum sector of the baseball card market back then, but other companies produced baseball cards in the early 50s as well: Red Man Tobacco was producing the last tobacco cards, for example, from 1952 to 1955. Yes, that is the same company which, in competition with their rival, Mail Pouch, seems to have attempted painting their name on every barn in America. Their cards were 3 1/2" by 4" when you received them, but they included a "proof of purchase" tab which could be redeemed for premiums, so the cards were completely square after the tab was removed. They were essentially one-sided because the reverse side consisted of advertising. That company was obviously unable to target kids with their product, and serious adult collecting would not occur until many years in the future, so they had to devote card space to promotional gimmicks which would make the tobacco chewers feel like good dads. The odd shape and limited space made these cards seem to be too cluttered with pictures and info. Mickey Mantle never appeared on one, but many stars did. Here's one of Spahnie's cards: 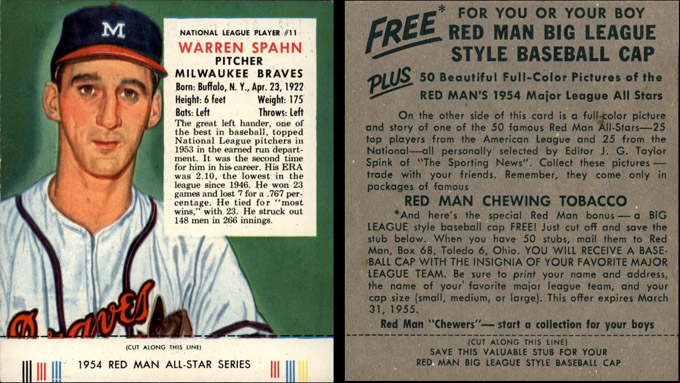 Some other companies to issue cards in that era were Berk Ross in 1951 and 52, Mother's Cookies in 1952, Wheaties in 1952, Johnston's Cookies in 1953 and 54, Spic and Span in 1954 (Braves only), and Wilson's Franks in 1954. There were some good sets in there - check out the Wilson's Franks set, which looks very much like a Topps design - but Mantle did not appear in all of them. From that particular list, he appeared only in one of the very weakest issues, the 1952 Berk Ross set, which probably produced the worst Mickey Mantle baseball card of all time. It looks like a 1951 Bowman that has been re-faxed too many times (below). 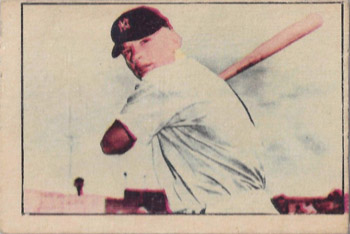 Mantle's other 1952 appearance was in a funky Tip-Top Bread set that can not really be described as "cards."

(See the image on the left, which is clickable if you want to see a larger version).

Bowman got the memo in 1953. The entry of a competitor into the marketplace and the success of the Topps 1952 set had forced Bowman to rethink their offering. They enlarged the cards, and created a pleasant design for the reverse. Then they went Topps one better by switching from drawings to sharp photographs. I really like their simple, uncluttered and elegant 1953 set, although that may have been an accident. Many of their 1953 cards seem to be centered poorly, with far too much empty space on the top. It appears that they intended to add graphics at the top of the photographs, then changed their minds. Here's a sample: 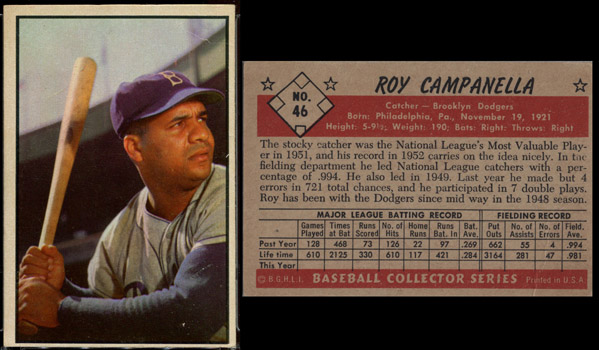 The idea of leaving blank spaces on the reverse for "this year," presumably so you can fill in your own stats, seems odd to me, but with that exception I find the Bowman card just as good as, or even better than, the comparable Topps issue, which looks kinda cheesy to me as I view it with adult eyes. 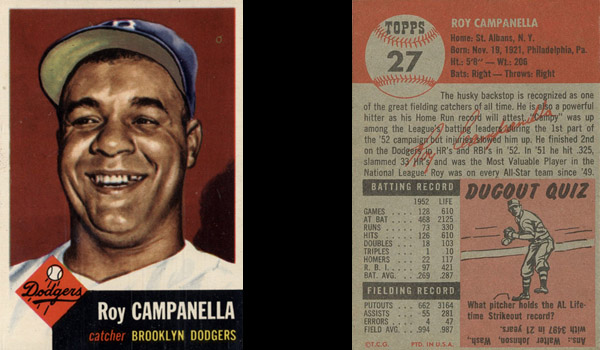 By the way, is Campy better described as "the stocky catcher" or "the husky backstop"? Both cards led with that idea. Husky? Stocky? It sounds like the way your aunt would describe your overweight cousin. How did they miss "big-boned"? They might just as well have said "Hey, Campy's a tub of lard, but the guy can play." I would have gone with "powerfully built" instead of "husky," but I guess people didn't get offended as easily back in the day. 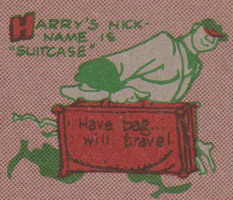 Maybe Topps' little cartoons and quizzes were cheesy, but I loved them when I was at the prime card-collecting age, about ten or so. I was always disappointed in the years when Topps omitted the year-by-year numbers and just printed the most recent year and the career stats, but it was fun to see how they would fill up the extra space created by that omission.

You just knew that any free space on the back of a Harry Simpson card would include a little cartoon of him carrying a suitcase. I can't remember which teams that guy played for, what position he played, or what he looked like, but I can still remember that he is Harry "Suitcase" Simpson!

Mickey was included in the 1953 Topps set, but he then got into some kind of exclusive deal with Bowman and did not appear in the next two Topps sets, finally returning to Topps in 1956, after that company had purchased Bowman and left him with no reasonable alternative. I'm not sure exactly why he left Team Topps, but he certainly wasn't able to complain that Topps didn't do him justice with their presentations. Here is his 1953 Topps card, a great card which makes him look like a powerful Adonis in a baseball cap: 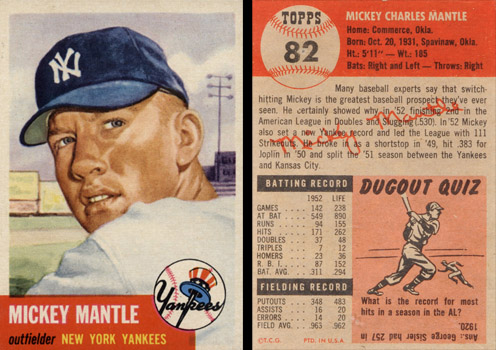 Bowman also issued two 1953 Mantle cards, one of Mickey alone and the other with two of his teammates, Hank Bauer and Yogi Berra. Although the photographs are fine, the layout of these cards, like that of the Campanella card above and so many others from the set, seems to have reserved room at the top for graphics that never materialized. 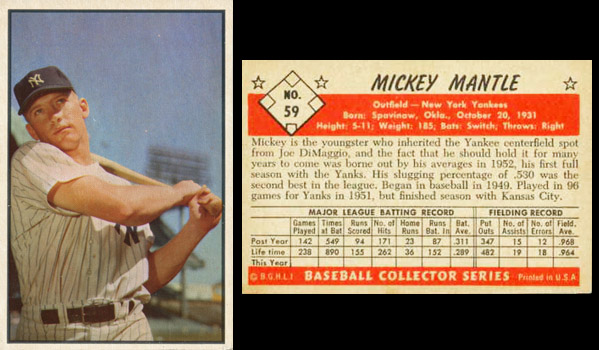 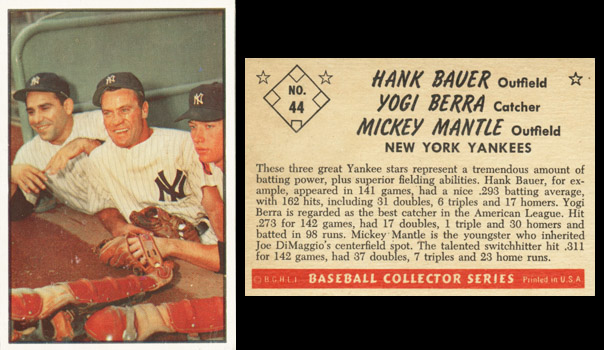 Although Mickey did not get a Topps card in 1954 (along with Stan Musial, Pee Wee Reese and Roy Campanella), he was issued a 1954 Bowman card. In my opinion Bowman had backslid a bit from their excellent 1953 set, but they produced another simple, uncluttered layout: 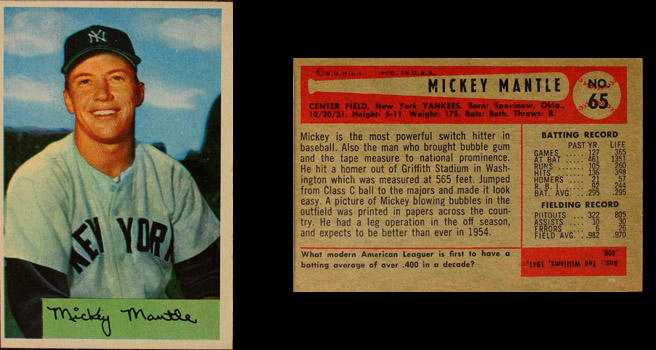 Mickey also appeared on other types of cards that year. One I like a lot is his card in the 1954 Red Heart Dog Food set. You're probably chuckling, but they were actually pretty attractive unnumbered cards! I doubt if Mickey was too thrilled with their verbiage, however, since they basically said he was easily injured and struck out too much. If they made the great Mickey Mantle seem to suck, I wonder how harshly they described the guys who really did suck. 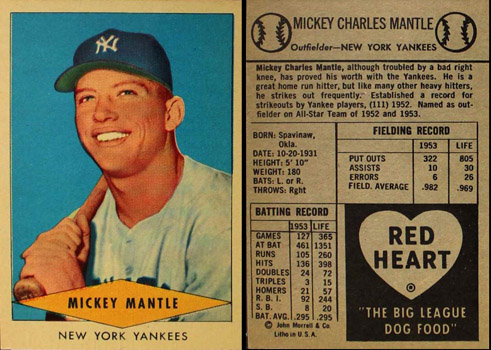 He also appeared on a 1954 Dan Dee Potato Chip Card, seen below. If you own mint copies of any of those 1951-54 Mantle cards you're probably a happy guy, but especially so if you own the the 1952 Topps which was auctioned off this week, or the 1951 Bowman, which has sold for more than a half-million dollars in mint condition. If you have them both, you're making more money on Mickey's career than he did! Mickey himself never earned more than $100,000 in a year, totaling only $1.1 million in his career. In the year that valuable 1952 Topps card was issued, Mickey made only ten grand.

The next year he raised his average to .365 and his OPS+ to 221. Unbelievably enough, his WAR actually improved a bit, to 11.3. He was the MVP again. In terms of WAR, those two seasons are both among the top twenty in baseball history, each of them better than any season ever achieved by Ted Williams or Stan Musial.

The Yanks chipped in an extra five grand.

You wonder why players wanted free agency? What would those seasons be worth today?

By the way, wandering back to the topic of that valuable 1952 Topps baseball card (the topmost Mantle card in the 1952 section) ...

What the hell was Mickey doing with that yellow bat?
Posted by Greg Wroblewski at 6:11 AM