Park orientation and other physical specifications

"It is desirable that the line from home base through the pitcher's plate to second base shall run East Northeast." - Official Baseball Rules, section 1.04.

It makes perfect sense to have the batter hitting toward the East-Northeast in most of the country, because winds typically come out of the Southwest in summer. That minimizes the wind effect, since the batter rarely hits into the wind, and gets little benefit from any trailing wind because he has an enormous grandstand behind him, blocking the breezes. On the other hand, it may be worth noting that the East Northeast rule was conceived before there were parks in Miami and San Diego, where the wind patterns are dramatically different. Marlins Park and Petco are laid out in reasonable compliance with rule 1.04, but perhaps they should not be. Left-handed hitters in Marlins Park hit Southeast into right center - directly into the Atlantic breezes when the roof is retracted. (This point is more theoretical than realistic because Marlins management rarely opts to play a game with the roof open.) Right-handed pull hitters in San Diego will find that the left field line is due Northwest from home plate, which would be nice in Miami, but is directly into the wind in San Diego. The July wind charts for these cities are shown below. (Click to enlarge and study.) 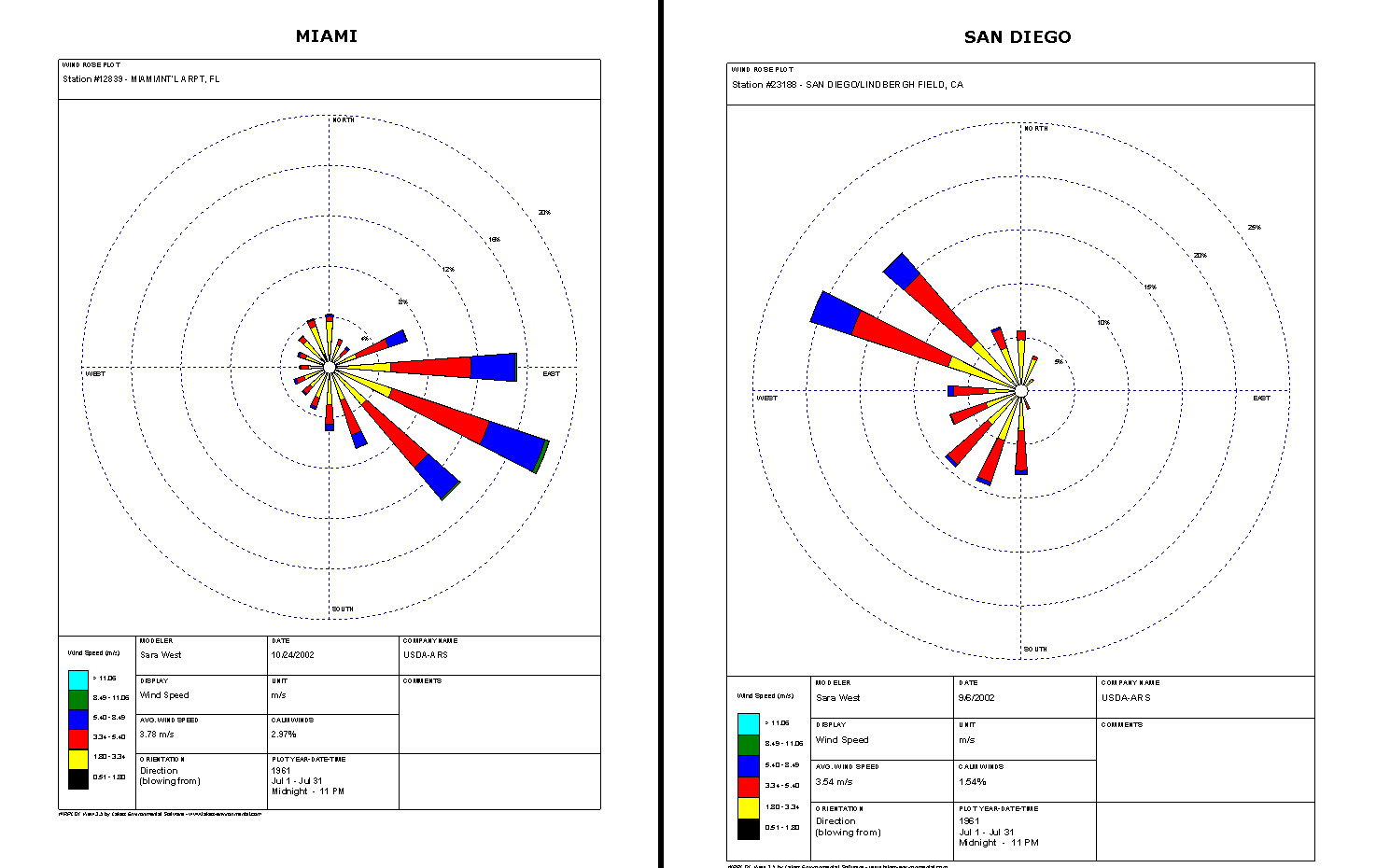 The chart below shows the orientation of the major league ballparks, the distance of the fences, and the height of the fences (parens following distance). If the centerfield dimension contains two numbers, the first is the distance to straightaway center, and the second is the deepest part of the park.

PF (HR) represents the 2014-2015 park factor for home runs only, expressed as a percent. The split is LH/RH.  In order to be listed as having a significant impact, the park must have shown at least a 10% effect in that direction in both years. An "x" indicates that there was no statistically significant trend. The raw data comes from baseballprospectus.com.


The following shows the average (summer) climate factors for the major league stadiums. Covered stadiums are always shown as 72 degrees and zero wind. The typical wind direction for any city in any month may be obtained through the NRCS. Extremes are highlighted in red.

Most major league franchises now do a significant amount of statistical analysis, and generally use their data to neutralize their parks to whatever extent is reasonably possible, that is to say, they try to make them extremely friendly neither to hitters nor pitchers. For example, if there are too many homers, management may raise or extend the fences; if there are have too few homers, they may block the wind or bring the fences in. Because of this constant tinkering, some of the more extreme park effects have been neutralized, so places like Citi Field, Petco, Safeco and even venerable Wrigley Field seem to be closer to neutral than in the past. You can bet that other places like Marlins Park and Comerica, and maybe even Yankee Stadium, will experience some tinkering in the future.

In some cases, it would be impossible to create anything close to a neutral ballpark on the existing site.

In some other cases, the solutions may exist, but are not immediately evident or desired.

Posted by Greg Wroblewski at 8:00 PM