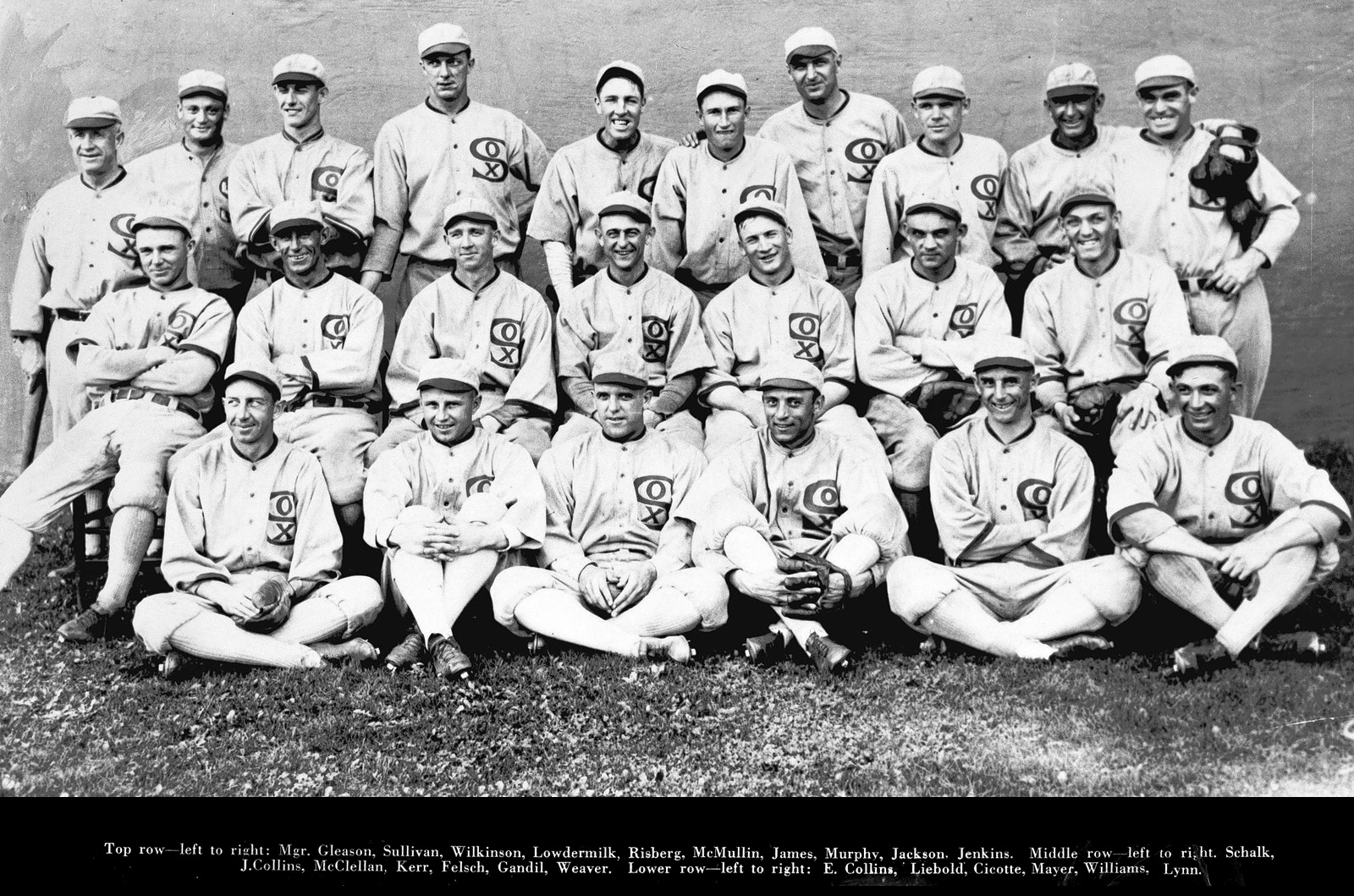 If so, that is regrettable, because almost everything you think you know is wrong.

"Eight Men Out" (hereinafter called 8MO) has often been described as journalism, and has usually been considered a work of non-fiction. It is neither. It would be correctly defined as an historical novel, because it has the following characteristics in common with that genre:

As a historical novel, 8MO is brilliant. It tells a cohesive, tidy story with a beginning, middle and end, filled with clearly defined characters and motivations. The tale skillfully weaves humor, drama and poignancy. The reader is led into an underlying sympathy for the underdogs (Jackson and Weaver, and to some extent Cicotte, Felsch and Williams) whose lives and livelihoods were trampled under the jackboots of larger-than-life Bond villains in Comiskey, Rothstein and Gandil.

But it's important to establish and understand that it is only a historical novel. Among the important figures in the scandal, Asinof was able to talk only to one gambler, Abe Attell, and one ballplayer, Happy Felsch. (Those links lead to Asinof's summaries of the interviews in another book, "Bleeding Between the Lines.") 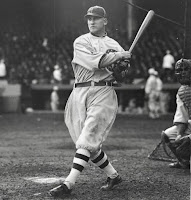 Among the ballplayers, Gandil, Risberg and Cicotte refused to talk to Asinof, and the other Black Sox had passed away before Asinof could reach them. Handsome, broad-shouldered Happy Felsch (left) seemed completely ingenuous, a co-operative and truthful contributor, but he had been just an overgrown kid who went along for the ride, not a conniving insider, so he knew almost nothing about how the scheme first developed. Asinof had to recreate the genesis of the plot using only court testimony as his source material, and he was unable to find the appropriate transcripts, so he had to rely on newspaper accounts which were not completely reliable, especially in summarizing secret grand jury testimony.

As for Attell (right), he had been a great prizefighter, but was not a man of dependable character. He told so many different stories through the years that all of his accounts must be called into question. More important still, Attell only knew of his portion of the scheme, which was basically based on a bluff, and which contributed only $10,000 to the players' pay-offs.

Most of the money that changed hands in the scandal went from the gambler Sport Sullivan to the first baseman Chick Gandil for redistribution. Gandil refused to talk to Asinof. Sullivan had been dead more than a decade when Asinof's research began. The other important gamblers, Rothstein, Burns and Evans, were also long dead by 1960, so Asinof had to fill in dozens of details from newspaper accounts and his own imagination.

There may have been many possible reasons for Asinof's factual errors, and it is not worthwhile to speculate about them, at least not in this context. It is more constructive simply to point them out and, to the limited extent possible, to correct them.

That account does reconcile with the grand jury testimony given by Jackson and Williams, as well as the newspaper interview given by Felsch. Those admissions account for $15,000. As for the remaining five thousand, it is pure speculation that it existed at all, or that it went to Risberg, although neither is an illogical assumption, especially given Risberg's insider status.

"He (Sport Sullivan) met with Brown (Nat Evans) in the lobby of the Congress Hotel. Together they removed the $40,000 Evans had placed in the safe before the Series. Sullivan, as planned, would deliver the sum to Gandil at the Warner Hotel.

When Sullivan arrived at Gandil's room, Risberg and McMullin were waiting for him. Gandil had been right to suspect that the Swede was not going to settle for that earlier payment of $5,000. It could be said that Risberg had good reason: he had made a major contribution to the White Sox defeat. He had barely hit his weight (170) and was no great shakes in the field. He smiled as he saw the forty fresh $1,000 bills that Sullivan withdrew from his coat pocket. The Swede walked away with $15,000: $10,000 for himself and $5,000 for his friend, utility infielder Fred McMullin, who had not yet received a dime.

First, there are only five men who could have testified to what happened that day. None of them ever talked to Asinof, and none of them ever told such a story elsewhere. Asinof started researching the book in 1960. Nat Evans died in 1935, and never discussed his role in the scandal with any journalists or authorities. Sport Sullivan lived until 1949, but kept mum about his role in the 1919 World Series fix, although he outlived all the pertinent statutes of limitations. Fred McMullin and Swede Risberg never discussed their roles in the fix with anyone. Chick Gandil refused to talk to Asinof, but did tell his side of the story in 1956. Unfortunately his self-serving version of events was riddled with holes, including a claim that he received no money at all, let alone the massive payday described above.

Second, the account is internally inconsistent. McMullin was present in the room when the meeting began, but Risberg ended up walking out with some money for himself and some for McMullin. If McMullin was there, why didn't he take his own money?

Third, Risberg did not "barely hit his weight" unless he was actually a 4th grader. He batted .080 in the Series. Asinof seems to have seen no need to look up the statistics of a World Series he was researching.

Fourth, Sport Sullivan had no reason to give the players their final pay-off when they had already lost the series. They had no recourse if he stiffed them. They couldn't go to the police, thus getting banned from baseball, confined to a jail cell, or both. They couldn't challenge Arnold Rothstein, which might have resulted in their confinement to a much smaller area than a jail cell, one about six feet below ground level.

Fifth, it strains one's credulity to posit that Gandil made $35,000 on the Series. That represented a vast amount of purchasing power in 1919. Since Gandil also got the loser's share of the Series money, some $3,254, he would have walked away from the club with $38,254 that autumn, by Asinof's reckoning. According to the inflation calculator, that would be the equivalent of $530,000 in 2015. In an era when the average worker made $25 per week, Gandil would have been a rich man if Asinof's account were credible, but there was no evidence then, or at any later period in his life, that he actually possessed that kind of money. Club owner Charles Comiskey had Gandil investigated by detectives. The only unusual purchases he made after the Series were a house worth approximately $6,500, on which he made a $3,200 deposit, and a new car that cost about $2,000. In 8MO, Asinof incorrectly reported that the detectives discovered that Gandil had purchased “a sizeable quantity of diamonds.” The detectives actually made no such report, nor anything like it. Since Gandil received $3,254 from his World Series share, which was just enough for the down payment on his house, only the cash for the car remains unaccounted for, and was presumably acquired from his share of the gamblers' pay-offs. For the remainder of his life, Gandil lived modestly and within his means as a semi-pro ballplayer and blue collar laborer. In fact, as early as 1922 Gandil was said to be "broke and working as a house painter, writing pitiful appeals for aid to his old friends in Chicago."


We will probably never know precisely how the money was actually distributed, but the evidence points to the following:


Nobody knows exactly how much was paid by the gamblers to the players, but the following outlines the likely possibilities:

We can therefore make some guesses at the payday Gandil might have earned as the instigator of the plot, direct contact to the gamblers, and re-distributor of the players' shares.

Scenario one, assuming the final $40,000 was paid to the players:

If the total amount paid to the players was $80,000 and the total amount paid to the other Black Sox was $40,000, as outlined above (Cicotte and Risberg $10k apiece, Williams, Jackson, Felsch and McMullin $5k apiece), or $45,000, as suggested by Asinov (the additional $5k going to Risberg), then Gandil took the rest, leaving the game with a fortune equivalent to more than $500,000 in today's dollars. If Gandil really had that much money, he kept it well hidden through the years.

In this scenario, Risberg also did a brilliant job of concealing his ill-gotten booty. Counting his World Series shares, Risberg would have had either $13,254 or $18,254 ($180k-$250k in 2015 dollars) at the end of 1919, yet continued to live simply, with no conspicuous consumption in evidence during his life. If he truly received that much money, he never really got much enjoyment from it. 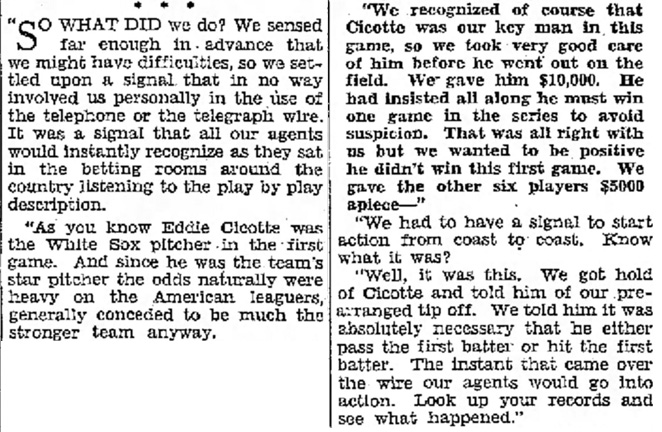 I prefer scenario two, but not because Abe Attell supported it. Over the course of more than 40 years, he retold the story many times, and the tale was different every time he related it, depending on whether he was telling the truth, drunkenly pretending to be a big shot, or disingenuously posing as a victim. There is no easy way to tell honest Abe from crooked Abe or to separate his confessions from his posturing. Attell aside, this scenario seems to reconcile more easily with how the players lived their lives from that point forward, and it supports the more likely supposition that the final $40,000 payment was entirely fabricated by Asinov.

Although one is more likely than the other, both scenarios are merely conjectural. A full century has passed since the Black Sox threw that Series and the whispers have silenced. The money trail is overgrown, and we know of no more evidence that can clear it. All we know for sure, perhaps all we will ever know, is that four players admitted to having received a total of $25,000 (Cicotte $10,000, Jackson $5,000, Felsch $5,000, Williams $5,000), that there was probably at least $10,000 more to spread around (the Attell contribution), and that poor ol' Buck Weaver has never been accused of taking a red cent. What the other three players received will probably remain an eternal mystery, since they have long since finished strutting and fretting their hour on the stage. Gandil, Risberg and McMullin were the guiltiest of the guilty, the coldest of the cold, the hard guys who never broke, but they can neither stonewall nor betray us any longer, for they have moved on - to a place beyond guilt, where a soft, warm breeze is always blowing out toward center, carrying their secrets with it.

Posted by Greg Wroblewski at 9:08 PM