What if Williams and DiMaggio had traded places?

Since Ted Williams made his debut in 1939, baseball's hot stove has been fired by debates about whether Williams and Joe DiMaggio might have been even greater players if they had traded places, therefore landing each of them in a park better suited to his skills. Since we now have detailed information about how each player performed in each park since the mid-20s, it's easy enough to offer a reasonable guess about how this imaginary swap might have worked out.

But the discussion probably should start by examining whether the question is even worth asking. Let's examine some of the underlying suppositions:

How do lefties perform in Fenway Park?

For various hypothetical reasons, people have long assumed that Fenway Park can be a difficult offensive environment for left-handed hitters like Williams. That assumption is simply not supported by facts. Every great left-handed hitter who has played for the Red Sox in the lively ball era has performed far better in Fenway than out of it.

First, consider the case of two slim, elegant outfielders who played together in the 70s: Fred Lynn and Carl Yastrzemski. Outside of Fenway they were .265 hitters with moderate power (OPS below .800 in both cases), but they terrorized opposing pitchers in Boston, especially Lynn, who hit .347 in Fenway, with an OPS over 1.000. 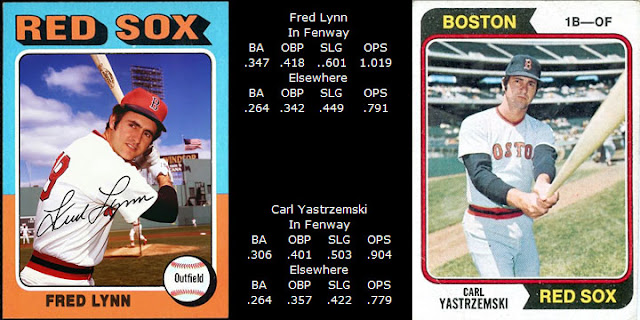 But the Fenway advantage is not limited to any specific type of lefty. The two big, muscular, lumbering sluggers in the group experienced the same kind of advantage. Mo Vaughn and David Ortiz were more powerful than Lynn and Yaz outside of Fenway, but still form two more examples of the lefty Fenway prototype: a .265-hitting Clark Kent transformed by Fenway into Superman with a .300+ batting average and an OPS right around 1.000. 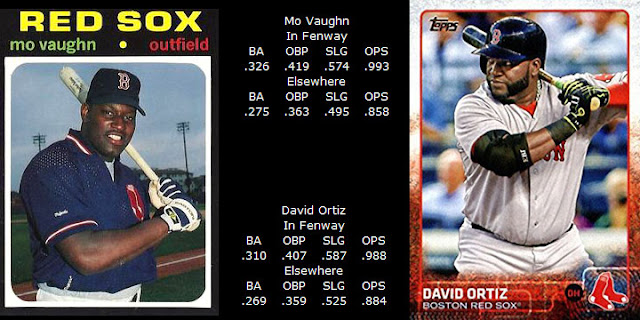 The final examples add two more types of hitters: Wade Boggs, a skillful line drive hitter who liked to use the opposite field when given the opportunity, and Ted Williams, a powerful hitter who almost never hit to the opposite field. Their stats demonstrate that Fenway enhances the production of any kind of lefty hitter. Both of these hitting machines, although polar opposites in their hitting approaches, were able to produce Fenway batting averages in the .360s. 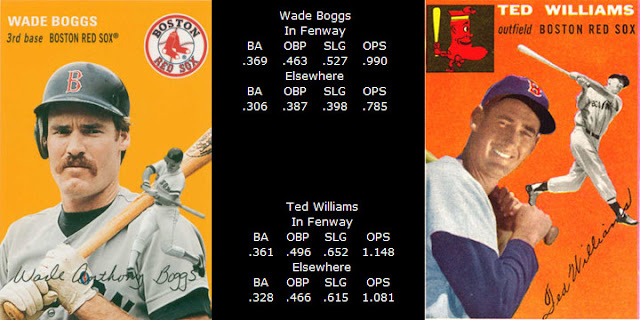 The composite of these six hitters creates a profile how how much the career of a great left-handed hitter can benefit from playing in Fenway Park.


Since a major leaguer plays half of his games in his home park, a lefty who plays his career in Fenway (as opposed to a hypothetical neutral park) can expect to add about 25 points to his batting average and nearly 50 points to his slugging average. That is very close to what actually happened to Yastrzemski and Williams, who did play their entire careers in Boston.

How did Williams perform in Yankee Stadium?

A look at Ted's lifetime statistics in Yankee Stadium reveal that he would not have enjoyed as productive a career there as he did in Boston. The simplest way to demonstrate that is by comparing his performances in Fenway Park and Yankee Stadium per 600 plate appearances: 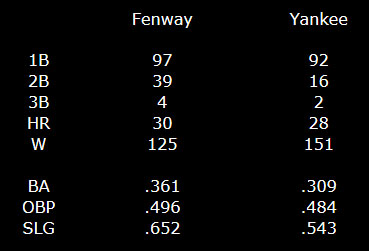 From these batting lines we can reach some fairly accurate conclusions about how a theoretical move from Fenway to Yankee Stadium might have affected Williams's individual stats. For every 600 plate appearances (roughly equivalent to two seasons' worth of home games), we can see that only two counting stats are significantly different: Yankee Stadium would have converted some 25 doubles into walks. His OBP, therefore, would remain about the same in the hypothetical relocation, but his batting and slugging averages would suffer.

I can only guess why Williams took more pitches and hit fewer doubles in Yankee Stadium.

(1) While both parks had short porches along the right field line and Fenway is deeper near the line, Yankee Stadium was deeper in right center and center. A 400-foot fly ball was always good for extra bases in Fenway, while Yankee Stadium produced many 400-foot outs with DiMaggio patrolling center. The depth of Yankee Stadium was not as traumatic for left-handed sluggers as for righties, but it gave those lefties some fits as well. See the dimensions pictured in the illustration below, which represents both parks as they were configured in Williams' day (click to enlarge). 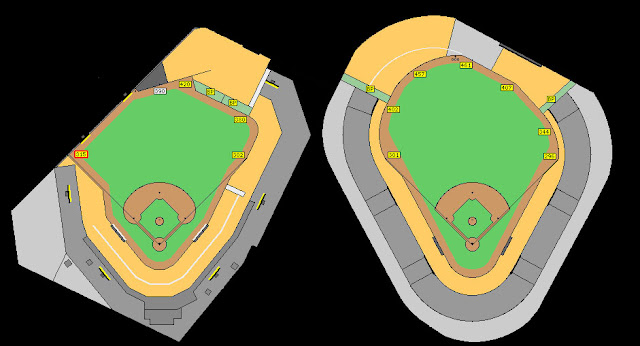 (2) Managers rarely start a left-handed pitcher in Fenway Park because of the short distances in left field. For example, Casey Stengel would notoriously skip Whitey Ford's turn whenever the Yankees traveled to Boston. From 1950 until 1960, his eleven seasons under the Ol' Perfessor, Ford started only five games in Fenway Park. Stengel knew what he was doing. During the course of his lifetime, Ford had a lower earned run average than Sandy Koufax, but Whitey's lifetime ERA in Fenway was a disastrous 6.16!!

In contrast, managers loaded up their rotations with lefties to pitch in Yankee Stadium because the distant fences from left center to straightaway center made that area Death Valley for right-handed sluggers. In the 1950s, where we have complete data available (unlike the 1940s), left handers started 29% of all American League games, and 33% of the games at Yankee Stadium, but only 11% of the games at Fenway. By playing half of his games in Fenway Park, Williams faced left-handed starters in only about 20% of his career games, while DiMaggio's Yankees, playing half of their games in the Bronx, faced lefty starters approximately 31% of the time.

Since a left-handed slugger would face far more lefty pitchers in Yankee Stadium than in Fenway Park, his overall performance would decline in the Bronx even if all other factors were constant. Even a great hitter like Williams was not immune to the platoon disadvantage. He batted only .318 throughout his career in games started by left-handed pitchers, versus .351 in his other games.

(3) Williams himself claimed that pitchers would pitch to him in Fenway because they felt protected by the the deep fence in right-center, but would always pitch around him in Yankee Stadium. He knew his game pretty well, and that explanation is consistent with the substantial increase in walks that he experienced in the Bronx.

Wasn't Williams' sub-Splinter performance in Yankee Stadium just a result of having to face the great Yankee pitching staff there?

Williams didn't seem to have any problem hitting against that vaunted staff in Fenway Park.

The specific differences between the two performances are much the same as Williams's overall splits between Fenway and Yankee Stadium. His home run rate was almost identical in both parks, but per 600 plate appearances, Williams drew 28 more walks at Yankee Stadium while hitting 30 fewer doubles (!!) That's not a misprint. He hit 46 doubles per 600 plate appearances against Yankee pitching at home, but only 16 in the Bronx.

Overall, how would the move have affected Williams?

If you knew everything above, you would never have asked the Williams/DiMaggio question in the first place, because you would realize that Fenway is a hitters' paradise, even for lefties, and you would realize that Williams did not meet our expectation for Splinter-like success at Yankee Stadium. Williams' career totals would have been significantly diminished if he had played in the Bronx. The mental picture we have formed of Ted Williams' hitting abilities is there because of Fenway, not in spite of it.

The following chart shows the result of that extrapolation:

Note that this extrapolation assumes that Williams would have the same number of plate appearances in the Bronx as he actually had at Fenway. That would not have happened in reality. He would have had fewer plate appearances if his home games had been in Yankee Stadium because there are fewer hits and runs there than in Fenway, hence fewer total plate appearances for everyone. (In the course of his career, Williams had 712 plate appearances against Yankee pitching at home, but only 639 at Yankee Stadium, but I don't know how much of that is attributable to run scoring and how much was created by management decisions.) If I were to adjust for a presumed decrease in home plate appearances, and a corresponding increase in road appearances at Fenway, all of his lifetime percentage stats would be a little bit higher in the "projected career" shown above because he would spend a greater percentage of his time in more favorable offensive environments. On the other hand, the counting stats would be lower because of the reduced number of opportunities. He might never have hit that 500th homer if he had been a Yankee.

And what about Mr. Coffee? 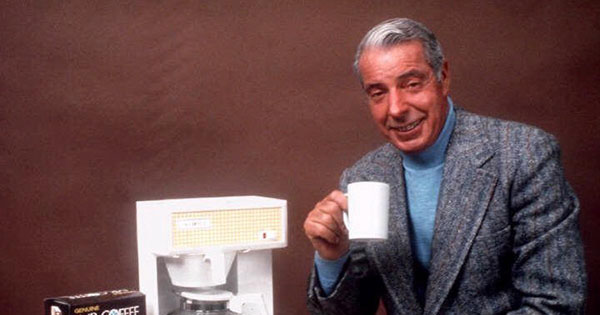 If you've been paying attention to the above, you undoubtedly realize that any right handed power hitter at Yankee Stadium would have profited from a move to Fenway Park, although the massive difference in the dimension of the parks in left and left center would be mitigated slightly by the steady diet of right-handed pitchers who take the mound at Fenway. Joltin' Joe's line at Yankee Stadium was .315/.391/.547 as compared to .334/.410/.605 at Fenway.

The difference can be summarized by just two transpositions, and they both make perfect sense.

His rates for singles and walks were nearly identical in both parks.

Performing the same extrapolations used for Williams creates the following projections for DiMaggio's hypothetical career with Fenway as his home.

If Ted Williams and Joe DiMaggio had swapped home parks, it would have worked out very well for DiMaggio, but not for Williams. As a result of DiMaggio improving while Williams declined, the theoretical swap would have resulted in DiMaggio finishing with a higher career batting average than Williams (.333 to .322) and a higher slugging average (.604 to .587). DiMaggio would also have picked up some 50 additional home runs. Williams, however, would still have the higher OPS by more than 50 points, thanks to a massive difference in on-base percentage (.476 versus .406 ).

Does that mean that DiMaggio was significantly closer to Ted's level than previously believed? No, not really. Slightly, yes. Significantly, no. This extrapolation does not level the scales. It simply tips the scales from an advantage for Williams to an advantage for DiMaggio. The theoretical careers for the two hitters just seem closer together than their real careers because of the imbalance of plate appearances at Fenway. Drilling down the stats, an observer will note that Williams out-hit Dimaggio in almost every park, so if the players had a perfectly level playing field, with the same number of plate appearances in every park, thereby denying the Fenway advantage to both of them, a straight average of the percentage stats in all the ballparks they both played in would look like this:

That would still leave Ted Williams with an hypothetical edge of 122 points in OPS, compared to his actual of 139. That leads us to believe that DiMaggio is slightly closer to Williams than their career OPS numbers would lead one to believe.

Posted by Greg Wroblewski at 5:47 PM