Did A-Rod Start Using Steroids in 2001, or earlier?

"If you believe he started using [PEDs] in 2001, when he said he did, you're a fool," a former teammate said. "The likelihood is that he never played a day clean in the major leagues. Why? Insecurity. Alex doesn't know how good he could be without drugs, and didn't trust himself to find out."

The statement cited above may be based on pure speculation, unqualified amateur psychology, or hard eyewitness evidence. It may even be completely fabricated from bitterness or jealousy, for A-Rod is not widely loved in the baseball community. We do not know. What we do know is this: if A-Rod started using PEDs in 2001, he somehow managed to find a batch of steroids that made him worse at baseball. His record in road games gives us a reasonably objective overview because it allows us to view his performance on a level playing field.

Baseball players are supposed to be better at ages 25-27 than they are at ages 22-24. This is not a universal truth, of course. Some players do have their best years when they are very young. Hall of Famer Eddie Mathews, for example, had the best three-year period of his career between the ages of 21 and 23, but such players are exceptional. A-Rod would like us to believe that he entered his baseball prime, started taking steroids, and watched his performance decline. He would also like us to believe that he was willing to start taking steroids when the Texas contract was already signed because he didn't want to disappoint the team which had just given him an immense amount of money, but he was not willing to do so in order to get that money in the first place. He would also like you to believe that he stayed clean in the 1998 era while working in a dirty Seattle clubhouse filled with steroid users, as confessed by Shane Monahan. He would also like you to believe that he stayed clean while palling around with this guy: 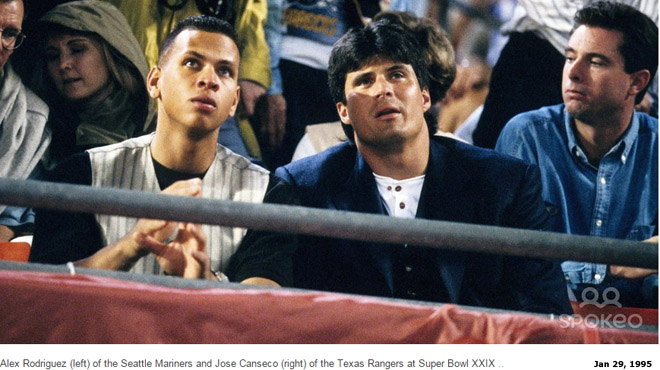 As A-Rod's former teammate said in the citation which began this article, "If you believe (that), you're a fool."

Surprisingly, very few analysts have taken note of these circumstances, possibly because A-Rod's overall numbers seemed to improve when he went to Texas. That was deceptive. It happened simply because he started playing 81 games per year in a hitter's haven in Arlington instead of in his previous haunts in Seattle (the Kingdome in 1998 and half of 1999, followed by Safeco in the rest of 1999 and 2000).

There is no evidence of a true improvement in performance after Rodriguez signed the contract with the Rangers, just a change of home parks. In my opinion, if he was using PED's in Texas (which he admits), then he must have been using them in Seattle as well.

Posted by Greg Wroblewski at 7:54 PM