The King and the Orator 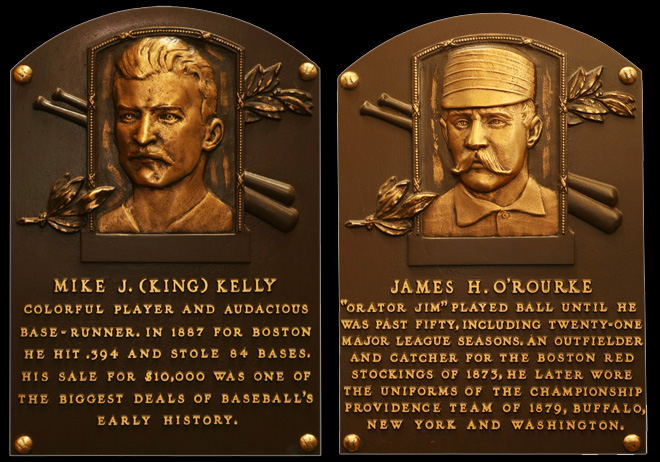 Looking back on it after more than 130 years, it doesn't really matter who won the National League batting championship in 1884, but it's interesting to see how we have approached that topic in our enlightened, data-obsessed era.

When that season ended, the "Batting Champion," which in their time meant the man with the highest batting average, was Orator Jim O'Rourke. The Spalding Guide not only noted his victory, but also felt this accomplishment was so important that they devoted a page of biographical prose to him, and accompanied it with his image, captioning it "Champion Batter of 1884." 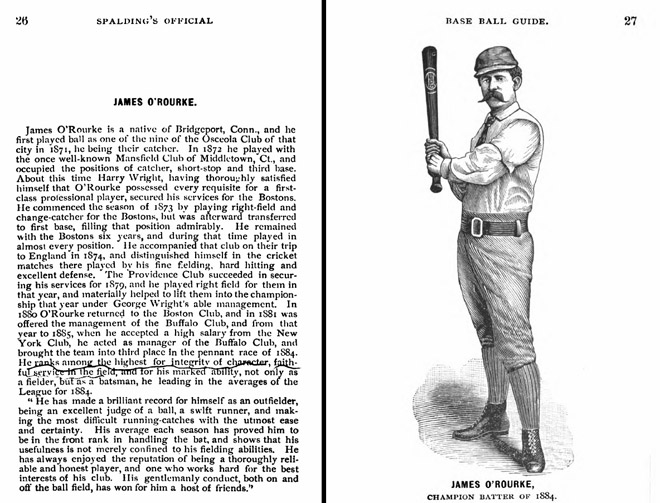 The tribute was followed by a leaderboard, showing that James "Orator Jim" O'Rourke had batted .350, narrowly defeating Ezra "No Colorful Nickname" Sutton, who had batted .349. Mike "King" Kelly, although not yet crowned with that title, was third at .341. 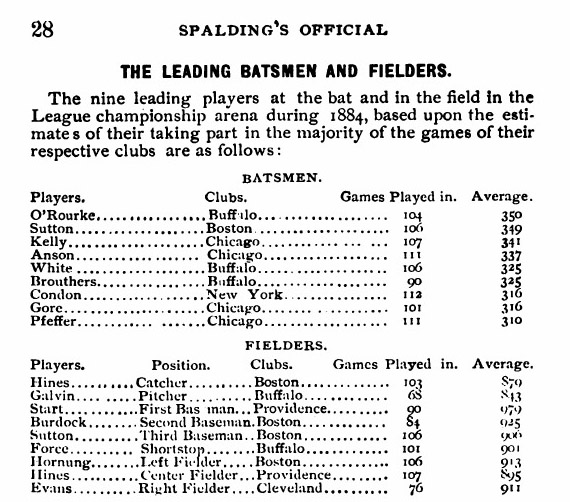 O'Rourke and everyone else alive at that time went to their graves thinking that Orator Jim had won that title. My 1959 Encyclopedia of Baseball still lists him on top with that average. As baseball researchers became more diligent, however, men started to comb through the old box scores to see if there had been any mistakes, and by golly, there had been a few that year, causing a new king to be crowned, King Kelly I. O'Rourke did finish a point ahead of Ezra Ballou "I Look Like an Accountant" Sutton in the revised calculations, with each of them dropping three points to .347 and .346, but the contemporary tabulations had apparently managed to understate Mike Kelly's average by 13 points, so his upwardly adjusted .354 now tops the list.

In a sense it's a shame that Kelly wasn't considered the champ at the time, because it would have been interesting to see what the page of biographical prose would have looked like. You can see that O'Rourke's bio notes that he is a high-minded and responsible man of integrity who helped little old ladies across the street and spent his off-season shielding those adorable baby seals from being clubbed to death. 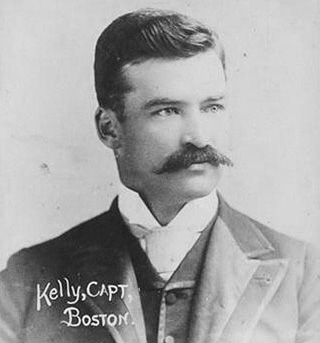 Kelly, on the other hand, was somewhat less of a gentle humanitarian. He was famous for many other things unrelated to his unquestioned superlative ability to hit a baseball. In the off-season he went touring on the vaudeville circuit as a performer. He eventually became the 19th century equivalent of a rock star after he was sold to Boston, where they love handsome and jovial Irish redheads more than just about any other place on earth - and handsome he was!

He was also the first ball player to write an autobiography, and is credited with having invented the hook slide, that innovation even having inspired a popular song.

But he also regularly led the league in two less desirable categories: cheating and drinking.

Many people think that John McGraw and the Orioles of the 90s were the true innovators of baseball shenanigans, but those guys were only refining Kelly's tricks. In fact, the practice of skipping a base when the umpire wasn't looking was referred to in the old newspapers as "the old Kelly trick." One of Kelly's innovations was one we used to use on the schoolyards when I was a kid: the third base coach would get the pitcher to toss the ball in his direction, putatively to check it for defects of some kind, while time was still in, thus allowing the runner on third to score.

Edward Achorn wrote of Kelly in his book about the 1884 season, "He cheated - frequently, outrageously, and almost unbelievably. As a catcher, he threw his clunky mask in front of runners trying to score, hoping to make them stumble before they reached the plate. As a runner, he readily blocked fielders from making plays; as a fielder, he shoved and tripped men racing past him."

Kelly was one of the best base-stealers of his time. I get the impression that was probably literally true. I picture his apartment filled with the bases he stole from every park in the league.

Kelly's shenanigans sometimes went beyond mischief. In September of 1882, playing in a critical game against the Providence Grays, Kelly broke up a double play by leaving the base line and punching George Wright in the shoulder as he was about to throw. That understandably upset the Providence manager, even more so because it happened to be George's brother, Harry. Kelly didn't bother to deny having done that, and he actually tried to justify it, basically by telling the dignified Wright to grow a pair because the great Kelly was a professional whose job was to win games, and was doing what he needed to do. According to Kelly in his autobiography (see below), he talked it out with ol' Harry and they became best buds. That is actually possible, because the King was a charmer, a good ol' boy who was well liked by fans and his fellow players. Most of his contemporaries knew that his skullduggery was just part of the rough-and-tumble game that was played in those days, and that Kelly just happened to be an exceptionally clever guy who was better than most at circumventing the rules. 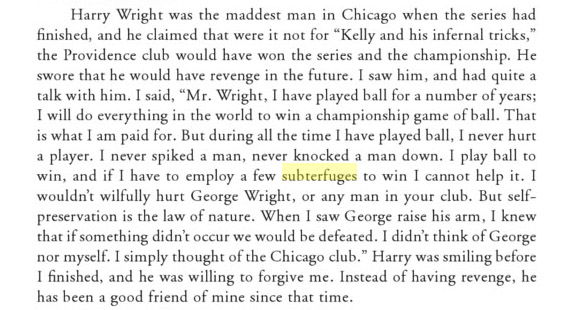 Kelly's drinking was even more impressive than his chicanery. Howard Rosenberg wrote, in his book about the rule-breaking in early baseball: "In 1898, Boston National League Director William H. Conant would recall having paid, around the time of the 1891 payment, a $200 bar bill for Kelly and friends and being forwarded, on a visit to the bar later that night, another Kelly tab for $140." The inflation calculator tells us "What cost $340 in 1891 would cost $9046.05 in 2015." Nine grand! Now THAT is a bar tab.

Poor, deposed Orator Jim was nowhere near as colorful or as handsome as King Kelly, and the only big tab he seems to have run up was in moustache wax, which he apparently offset by holding down his spending on combs and hair tonic. 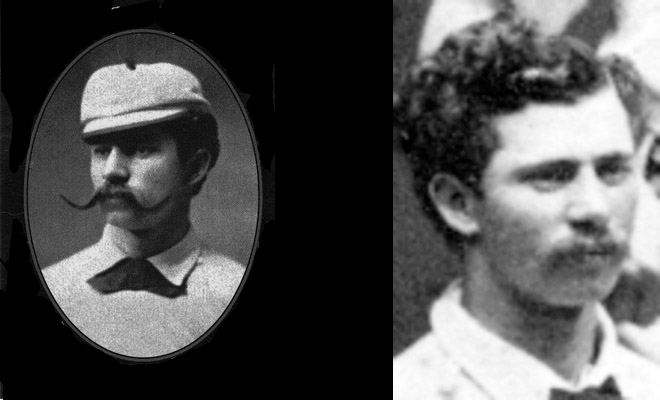 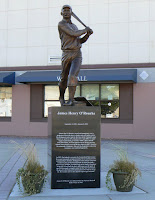 He was probably best known for being an excellent speller and flossing regularly. O'Rourke took such good care of his health that he was 39 years old when he achieved his major league highs in hits, doubles, homers and RBI. He batted .360 that year, with 115 RBI in only 111 games. He got his last major league hit at age 53. Two years after that, he came to the plate 348 times in the minors for Bridgeport, in the same town where he was born and eventually died. He played his last minor league game at age 61. He lived another seven years after that and his obituary in the Brooklyn Daily Eagle remarked that he was a sober man who had invested his money wisely and died worth a small fortune. In his native Bridgeport, the local obit noted that in addition to all of his sporting and financial achievements, he had been a kindly father and a splendid citizen. O'Rourke was so beloved in Bridgeport that they built a statue of him (right; click to enlarge).

Kelly, on the other hand, had spent his money on whiskey and good times. He died penniless, and he was only 36 years old.

So, tough break on that batting championship, O'Rourke.

Posted by Greg Wroblewski at 11:14 PM