The Diamond Anniversary of the Summer of 1941

I am writing this at the beginning of 2016, a year which will mark the Diamond Anniversary of baseball's greatest summer and America's last year of innocence. At the beginning of 1941, the two mightiest countries in the world, the United States and the Soviet Union, somehow thought they could remain almost uninvolved as Hitler's legions swept across Europe while Japan attempted to conquer China. That naivete would be shattered that year, first in June, when the German tanks made their way toward Moscow:

Then again in December, when the Japanese executed their stealth attack on Pearl Harbor on the Day of Infamy.

In spite of the drama in Europe, and oblivious of the Hawaiian tragedy to come, the baseball season proceeded normally, and eventually became wonderful. Nothing happened in April or early May to offer a glimpse of the glorious events yet to transpire. The ever-dominant New York Yankees seemed to be sluggish as they came out of the gate. They were 14-14 on May 14th, and they dropped uncharacteristically below .500 on the following day when they were shellacked by the Chicago White Sox. But something special happened for the Yankees in that May 15th loss. Their star hitter, Joe DiMaggio, broke out of an embarrassing eleven-game slump in which he had batted .195 with no homers and a single RBI. He had gone hitless in seven of those eleven games, and the proud Yankees had gone 3-8 in that period.

Then, on May 15th, as recorded in the 1941 newspaper article below, he noticed a flaw in his batting stance: his toe wasn't planted correctly. 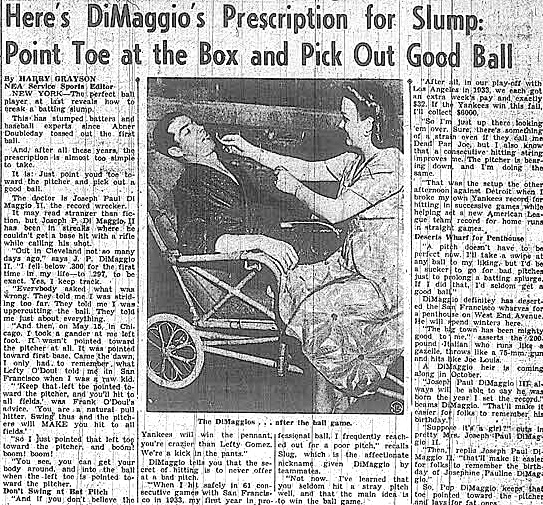 The toe was the key. The slump was over. Joe D's lone hit on May 15th didn't seem like much at the time: just a single to bat in the Yankees' only run in a humiliating 13-1 loss.

But it was an omen.

DiMaggio would not go hitless again until July 17th. Through game after game, 56 in all, DiMaggio punished pitcher after pitcher, and motivated baseball historians to start combing the record books. At 41 games, on my mother's 21st birthday, he tied the existing 20th century record set by George Sisler in 1922, then broke it the following day.

The only player left between DiMaggio and complete dominance was an old-timer named Wee Willie Keeler, a 5'4", 140 lb. hitting machine with a lifetime .341 batting average, who had gained a measure of fame with an eminently quotable explanation of his hitting success: "I hit 'em where they ain't." In 1897, Keeler had begun his most remarkable season with a 44-game hitting streak. The little rapscallion would finish the year at .424.

DiMaggio tied Keeler in the second game of a July 1st doubleheader, then passed him on the 2nd of July.

He wasn't even close to being done. He had eleven more games to go. The Yankee Clipper had put his team on the deck and set sail. In those 56 games, the Yankees would amass 41 wins to take a six game lead in the standings. They would not falter the following day, either, despite the end of their young slugger's streak, as they defeated the Indians 4-3. DiMaggio's streak had electrified the nation, and its terminus was worthy of headlines. 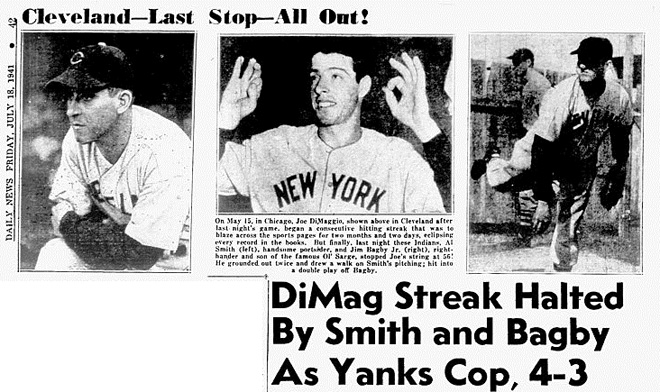 The Bronx Bombers would not have to wait long for their ship to carry them further, for The Clipper still had more wind in his sails. After his hitless game, he proceeded to hit in the next 16 games, during which the Yankees went 13-3 to take an insurmountable twelve and a half game lead. DiMaggio had hit in 72 out of 73 games.

Not generally noted is the fact that DiMaggio had reached base on a walk in that one game without a hit, and had also walked in the game preceding his streak, giving him an astounding record of having reached base in 74 consecutive games, stretching from May 15th until August 2nd. The Yankees went 55-17 in that period (with two ties, because night ball was still in its infancy), on their way toward 101 wins in a season which had started 14-15.

Excluding records which have been assured permanence by changes in the game, like Cy Young's record of 749 complete games, or Yogi Berra's 71 World Series hits, DiMaggio's streak is probably considered the most unbreakable record in the game. Nobody ever came close to it before, and nobody has come close since. Nobody else ever hit in as many as 50 consecutive games. Nobody else ever hit in more than 45. Think of it this way: DiMaggio actually had eleven hitting streaks of 46 games or more in his career (games 1-46 of his streak, 2-47, ... 11-56), while nobody else ever had a single one. Here's how the math works: if DiMaggio himself were to come back and produce the exact same statistics he actually produced in 1941, the odds would be 7518-1 against his hitting in 56 consecutive games. If you really care about all the probability calculations involving this and other hitting streaks, I once wrote a long and complicated treatise on this subject, which is so tedious that it is now boring even to me as I read it 15 years later.

Is any modern player likely to break the record?

I guess you didn't read up to here, huh?

The answer is no. The obvious reason is that even if Joe DiMaggio himself could come back as an immortal being and hit as well as he did in 1941 every year for the next several thousand years, he would not be likely to duplicate the streak of 56. It was a fluke. It was nearly a miracle. If you believe in miracles, maybe it was one in a time that needed one.

But we are not finished with our tale of the magical summer before Pearl Harbor. DiMaggio's streak was the personal highlight of his career and probably would have been the highlight of anyone's career. During that 56-game period from May 15th until July 16th, he batted .408 with an OPS of 1.180.

Making him the second-best hitter in the American League during that period.

That's right. Ted Williams was such a good hitter that he out-hit DiMaggio DURING the legendary streak that has never come close to being matched.

Here's what they did from May 15th through July 16th:

And in fact Williams was so good that this was a below-average portion of his season! Both his on-base percentage and his slugging average were higher for the entire year than they were in that period. That brings us to the second great story of that summer. It was the last time any major leaguer ever hit .400. That particular player would be the same Mr. Teddy Ballgame, who finished the 1941 season at .406. And, yes sir, they had baseball bubble gum cards in 1941. 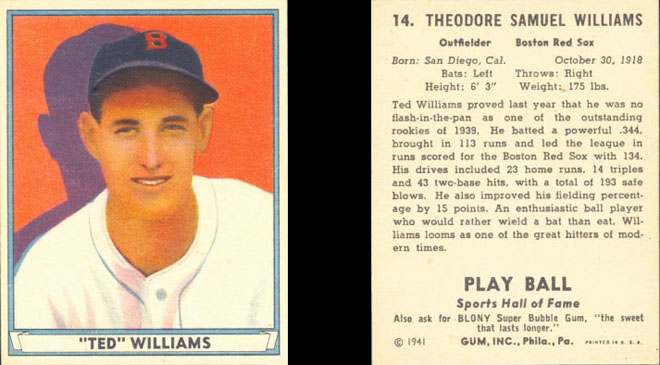 Williams closed out the .400 season in spectacular fashion. You may have read the story before or heard it from an old-timer, but the yarn about the last day of the season bears repeating. Williams went into the final day of 1941 hitting exactly .400, rounded up from .39955. He had been at .413 after the September 10th game, but in the next thirteen games he had slumped, batting only .268, and he was just plain flat at the plate. Since the Yankees had already clinched the pennant by a mile, Williams' manager, Joe Cronin, offered to let the Splendid Splinter sit out the final double-header to assure a .400 season and a place in history. Williams wanted no part of it. He got a hit in his first at bat to place him comfortably above .400, and still refused to sit. He played the entire double-header, went 6-for-8, and finished at .406, landing him on the front page of the Boston Globe, right there with the Nazis.

Here's a detail you probably had not heard. Under modern rules, Williams batted .411 that year. From 1931 to 1953, except for 1939, a run-scoring fly ball counted as a failed time at bat. Williams had six such at-bats that summer, none of which would have counted against his batting average in any year after 1953.

Baseball's high sheriffs kept going back and forth on sacrifices. There was even a brief period (1926-1930) when a batter was not charged with a time at bat any time a runner was able to tag up and advance to any base after a fly ball out. The executives changed that rule and made some other adjustments when they realized that batting averages were going through the roof. In 1930 the entire National League batted .303; in 1931 only .277.


1941 did not mark the last time Ted Williams would show up Dimaggio's hitting feats. He never amassed a long hit streak because he took so many walks, but he finally beat the 74-game on-base streak in his 1949 MVP season, actually unremarked at the time, when he reached base in 84 consecutive games, from July 1 almost to the end of the year.

Williams' superior hitting did not win him the 1941 MVP, however. The DiMaggio streak was followed by every sports fan in America, plus DiMaggio was a smooth centerfielder who carried his team to a spectacular runaway victory in the 1941 pennant race. And many people found Ted Williams to be an arrogant dick. Those factors were considered by the electors, who made Joltin' Joe the 1941 MVP. 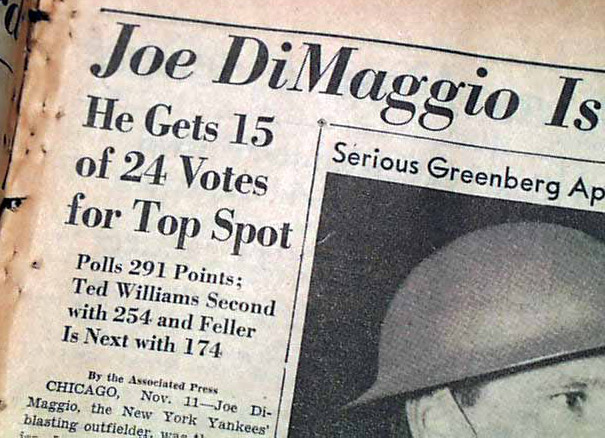 Posted by Greg Wroblewski at 11:59 PM