Did the commissioner rule correctly?

Yes. He had absolutely no other option. It always amazes me that people step in to object to this. In reality, this is a black-and-white issue.

Here is how Rule 21(d) reads, and has read for some 90 years: "Any player, umpire, or club or league official or employee, who shall bet any sum whatsoever upon any baseball game in connection with which the bettor has a duty to perform, shall be declared permanently ineligible."

There is no wiggle room in that rule. It doesn't matter whether the player knew about the rule, or how much he bet, or whether he bet on his team to win or lose. You may think it is unfair that none of those factors are considerations, but that doesn't matter. What does matter is that the various commissioners didn't really ban Rose. He banned himself, since he knew the rule and bet anyway.

Everything else is merely camouflaging the issue. Was he great on the field? Sure. Has he repented? Some say yes, others say no. Has he suffered enough? Opinions vary. Has he ever come clean? Nobody knows but Pete. When he bet on his own team, was it always to win? Maybe - that's what he says, anyway. But none of that matters. The commissioner is hamstrung by the clarity of the rule. There's nothing he can do no matter how sorry Rose is, even if 100% of the fans want him reinstated. Rule 21(d) means that if he placed any bet, on either side, in a game that involved him, he's permanently ineligible. What do Pete's apologists want? Do they really expect any man in a position of power to say Rule 21(d) applies to everyone but Pete? That is never going to happen, no matter who is commissioner. The only way to lift his ban is to change the rule.

There have been players in the past who were banned "permanently" and subsequently reinstated, but they do not form a precedent for the Rose case. They were not banned for violating 21(d), but for conduct detrimental to baseball. That's conceptual and leaves plenty of room for subjectivity. Commissioner Bowie Kuhn once banned Mickey Mantle and Willie Mays for life because they were working for legal casinos after they retired. 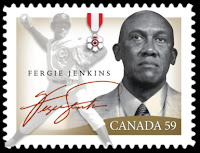 He also banned Ferguson Jenkins for life while Fergie was still an active player because Jenkins was found to possess drugs during a border crossing. Kuhn was kind of the Roger Goodell of his day in that every decision he made regarding players was arbitrary, or stupid, or both. Charlie Finley, never one to mince words, called Kuhn baseball's village idiot. Jenkins took his case to arbitration and won. Kuhn publicly whined and sniveled about the decision, but only after he had pulled a Goodell by failing to appear at the hearing, knowing full well that he would be publicly chastised by the arbiter. Some two decades later, Jenkins himself would become commissioner of the Canadian Baseball League, and would be honored on a postage stamp.

Kuhn, meanwhile, founded a law firm and ended up filing for bankruptcy, with a bank and some of his associates accusing him of shenanigans in the legal proceedings.

As for the Mantle and Mays ban, Peter Ueberroth reviewed that decision when he became commissioner, and it took him about 30 seconds to find it utterly insane, thereby reinstating two of baseball's greatest and most beloved figures.

The real point here is that Rose's case is completely different. It is debatable whether Jenkins, Mays and Mantle were committing an offense which justified a permanent ban, but there is nothing debatable about Rose's case. The rule is clear; the punishment is specified explicitly. You may think the rule should have some nuances or subtleties, but it just doesn't, and no commissioner can possibly make any other decision unless the rule is changed.

What about the Hall? 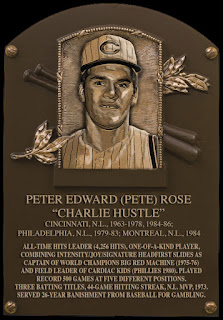 The Hall of Fame debate is completely different, although the issues are interconnected. The directors of the Hall could make Pete eligible right now. They do not need MLB's permission to do so, but they too are hamstrung by a rule, specifically 3(E), which states "Any player on Baseball's ineligible list shall not be an eligible candidate." That again is a black-and-white rule which applies to everyone, not just Pete, but the Hall's directors are free to strike it or modify it, no matter what the commissioner thinks. The Hall existed for 55 years before that rule existed, so it could certainly exist without it again. The only problem is that eliminating the rule opens up Pandora's Box. It would not only make Rose eligible, but others as well. Should that happen? Now we have wandered into the realm of the subjective, and I'll leave you to your opinions.

Posted by Greg Wroblewski at 5:40 PM