Occasionally we inextricably link two people in our minds, like Abbott and Costello, or Ralph Branca and Bobby Thompson. When I think of Norm Siebern, my mind immediately jumps to Jerry Lumpe.

They were both born in Missouri, about two months apart in 1933, both grew to 6'2" and were right-handed throwers who batted left-handed. 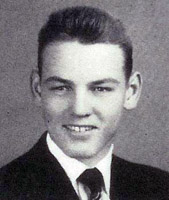 The two youngsters were both signed by the Yankees and played together in 1951 at McAlester in the class-D Sooner State League, where Lumpe hit .355 and Siebern (seen right, in his 1951 graduation picture) chipped in with .331.

They played together again in 1952, back in Missouri at Joplin in the class-C Western Association. This time Siebern was the star, hitting .324 and developing a power swing while Lumpe hit .293, but with only two homers.

They were still in college at that time, and in 1953 they played together again in a different sport, as teammates on the two-time NAIA national basketball champions at Southwest Missouri State.


That was the military draft era, so in 1954, upon leaving college, they both entered the service and missed about two years of minor league baseball.

Right after his service hitch, Siebern showed a strong enough home run stroke in Denver that he earned a brief major league stint in 1956. The Yankees won the World Series that year, but Siebern got only a single plate appearance in the 1956 Fall Classic, an unsuccessful pinch-hitting assignment in game two. He did get to join the stars in two key celebrations: one when the Yankees won, and another when Don Larsen pitched the only perfect game in World Series history (see below, Siebern is #36). 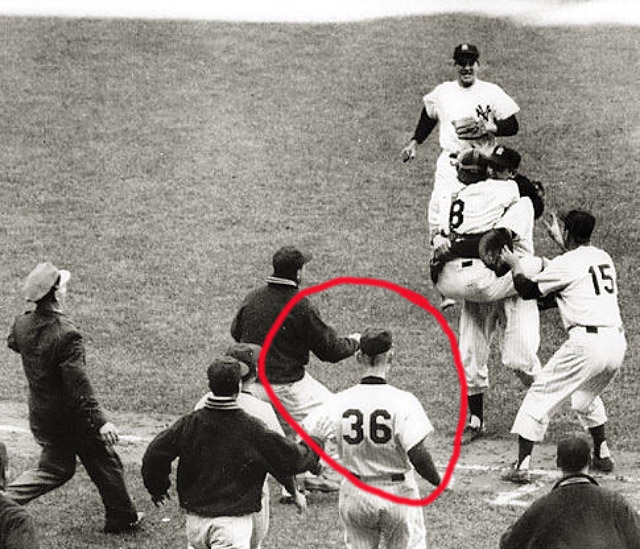 By 1957 Siebern and Lumpe were each in triple A, but with two different Yankee affiliates. Siebern absolutely crushed the American Association in Denver, where he hit .349 with 45 doubles, 15 triples and 24 dingers. Lumpe played well enough in the International League that he got a call-up to the Yankees, who needed some infield help at the time. Lumpe provided it. He hit .340 in 40 games, mostly substituting for Yankee third baseman Andy Carey, and then had substantial playing time in the 1957 Series, hitting a solid .286 in six games. 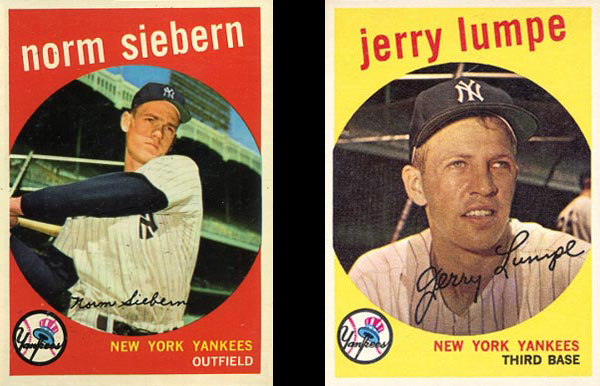 Siebern was already showing signs of becoming a star in that 1958 season. He became the Yankees' starting left fielder, hit .300 with both walks and power (136 OPS+), and won a gold glove. He finished second on the team in WAR, behind Mickey, but ahead of Yogi, Elston, Skowron and the rest! He and Lumpe both played in the 1958 World Series, in which the Yankees got their revenge against the Milwaukee Braves.

The future looked bright for Siebern as 1959 dawned. He already had two World Series rings, and in the previous two seasons he had posted one monstrous year in AAA and a very promising season in the majors. But he failed to develop in 1959. In fact, he backslid a bit, and the Yankees slumped to a rare poor year (79-75). Siebern was considered expendable because the Yankees really coveted a certain 24-year old Kansas City outfielder named Roger Maris, so in 1959 Siebern was traded to the Kansas City A's in the Maris deal. Meanwhile, Lumpe was also traded to KC in 1959 in the Ralph Terry deal, so the twins were again conjoined for the 1960 season, but with a different team.

As always, the wily Yankees got the best of the deals. Lumpe and Siebern were good players, but Terry and Maris turned out to be superior. Terry followed a 16-3 season in 1961 with a brilliant 23-win effort in a 1962 campaign that culminated as the World Series MVP. Terry then led the league in WHIP and complete games in 1963 before he essentially threw his arm out. Maris, of course, won back-to-back MVPs and broke Babe Ruth's sacred single-season homer record.

Lumpe and Siebern probably missed the annual thrill of World Series competition with the Yanks, but it seemed appropriate that the two Missouri boys ended up together again in Kansas City. They would remain teammates on the As until 1963, and would even appear together on joint baseball cards in 1961 and 1962.

The reunited teammates played well for the Missouri fans. Siebern had two excellent years in 1961 and 1962, especially 1962 when he had 25 homers, 117 RBI, and a .412 OBP. Lumpe also had his best year in 1962, batting over .300 for the only time in a full season, and reaching double figures in both triples and homers, two more feats he could never duplicate. Their 1962 Topps cards are seen below. 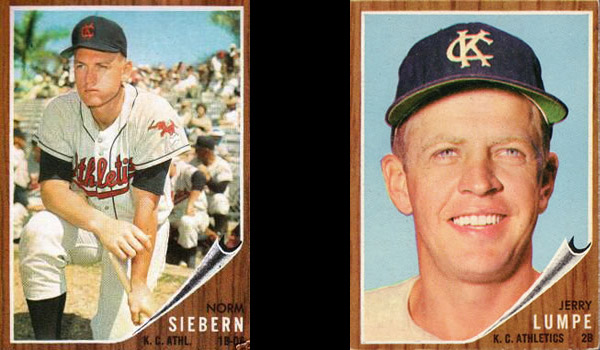 More than 50 years after their last alliance as teammates, Lumpe and Siebern died, as they had been born, a short time apart.
Posted by Greg Wroblewski at 1:08 AM