Yes, that was really his name. 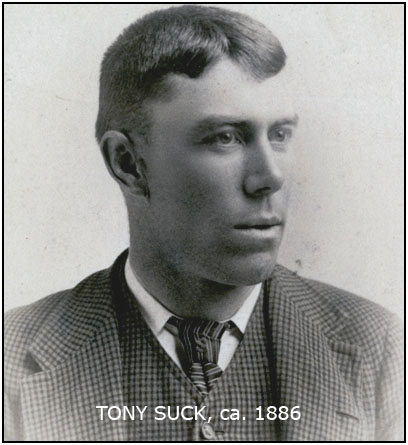 And not by an accident of birth. He chose to be Tony Suck. He was born Anthony Charles Zuck in Chicago on November 11, 1858, and then, somewhere along the way, for reasons now shrouded by mystery and in a time unrecorded, Zuck became Suck.

Sure, there have been other major league hitters who truly sucked. Bill Bergen, Casey Wise and Ray Oyler, all of whom had lifetime batting averages in the .170s, come immediately to mind. But none of them sucked like Tony Suck. Tony truly lived up to his name. His major league batting average of .151 in the 1880s was only the tip of his sucking iceberg, because he achieved his minimal success in the Union Association, a marginal major league at best. In his brief stint in the National League, he batted a perfect .000.

He took a year off from pro baseball in 1885 and, according to the Louisville Courier-Journal on May 11, 1885, was playing for an amateur club called the Chicago Blues. He then attempted an 1886 comeback in the Southern Association, which at that time was a very low-level league, and hit a sparkling .091 (8 for 88) for the Augusta Browns. From 1887 onward, he and the professional baseball teams seemed to come to the realization that Tony didn't have the right stuff, and with one exception, all future mentions of him in contemporary newspapers indicate that he was an umpire, and apparently a pretty good one.

The one exception? An interesting 1895 article in the Chicago Inter Ocean (left; click to enlarge) discussed the players who had most disfigured their hands by playing the catcher position. Silver Flint and Tony Suck seem to have won the lottery! Tony had already died a few months before that article appeared, and that was basically the last time I could find him mentioned in a newspaper for almost 90 years until somebody commented on his funny name in the Louisville Courier-Journal in 1984.

Was Tony able to stay in the game for his glove skills, ala Bill Bergen and Ray Oyler? I doubt it. He played 32 major league games at catcher and made 32 errors. He played 15 games at shortstop and made 16 errors. He also subbed in the outfield, where his fielding percentage was .783. While 19th century fielding stats are misleading when viewed out of context because the game and the gloves were very different in the 1880s, Tony nonetheless seemed to be below average at everything.

The term "to suck" in its modern context did not come into vogue until the early 70s. (The OED says its first appearance in print occurred in 1971.) When I was a kid in the 50s, the equivalent was "to stink." We did use the verb "to suck" in a non-sexual context on the playground, but it meant "to achieve undeserved success" or "to be unduly lucky" as in "he played like shit, but somehow sucked in a win." I guess the point of this digression-within-a-digression is that poor Tony Suck could not have known how we would view his name.

There are those who say that our names play a part in determining our fates, and therefore that a guy named Duke Pfister is more likely to become a successful boxer than a guy named Murray Finkelstein. There is undoubtedly at least a grain of truth to this axiom, thus explaining why a young man named Randall Poffo thought his wrestling career might go better as Randy Savage.

I wonder if things would have worked out any better for a youthful Anthony Zuck if he had changed his name to Tony Star.

Posted by Greg Wroblewski at 5:08 AM