Why didn't DiMag make the Hall on the first ballot?

Reader question: Why is it that Joe DiMaggio had to wait until his third year of eligibility before being elected to the Hall of Fame? Didn't people respect his ability enough to elect him on the first ballot?

Good question, but you're thinking of it in modern terms. In our era, baseball players retire and they are basically only competing against other guys from their own era. In the early 50s, there were still all-time greats in the backlog, but the voting procedure was essentially the same as it is now - a player had to appear on 75% of the ballots to make the Hall. There were so many great players eligible that it was almost impossible to get in. There were 46 future Hall of Famers who received votes in the 1951 election, and other future HOFers, like the great Goose Goslin, who never got a single vote that year!

In 1950, the Hall inducted nobody, not one single man, even though the ballot included a few guys you may have heard of:

There were many more greats below that group, so many of 'em that they split the ballots and none could get the required 75%.

That's just the way it was. Consider these other gentlemen who, like DiMaggio, did not make it on the first ballot: 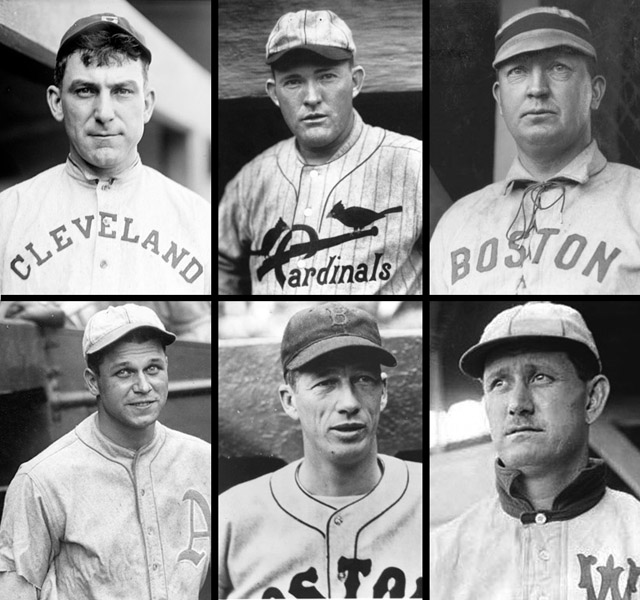 A couple of fairly good guys named Cy Young (top right) and Nap Lajoie (top left) got in on their second try. Lefty Grove (bottom center), who has a very strong case as the best pitcher of all time, had to wait until his third try, just like DiMaggio. Rogers Hornsby (top center), the greatest hitter in the history of the National League when he retired, finally made it in his fifth year on the ballot. Double X (bottom left) retired in 1945 as the #2 guy on the all-time homer list and didn't make it until 1951, his sixth year on the ballot! Ed Delahanty (bottom right), probably the greatest hitter of all time before Cobb/Wagner/Lajoie came along, never got in at all. He was on the ballot for six unsuccessful years, came close to the bell but won no cigar, and was finally admitted through the back door by a special Old-Timer's Committee.

You may be wondering how 1951 could have been Jimmy Foxx's sixth year on the ballot when he had retired after the 1945 season. Actually, Foxx had received ballots as far back as 1936, nine years before he retired! That's because there was no five-year waiting period back then. Most people don't realize that the waiting period has evolved over time.

Phase 1: In the first Hall of Fame vote in 1936, there was no waiting period at all. Babe Ruth, who had retired just the year before, was elected, and active players such as Lou Gehrig and Foxx got many votes.

Phase 2: Voters were discouraged from voting for active players after the 1936 election, but the practice was not actually forbidden by the rules, so a small trickle of votes continued to come in for players who were still in uniform. In fact, DiMaggio himself was the among the last active players to get a vote. The last time that happened was in the 1945 election when DiMaggio, Joe Gordon and Hank Greenberg received some support.

Phase 3: In 1946, a "one year after retirement" rule was adopted. DiMaggio originally became eligible during that brief period when eligibility was determined by the one-year rule, and since he had retired after the 1951 season, he was therefore not on the 1952 ballot, but was added in 1953, when he got shellacked by a roster of backlogged all-time greats.


In 1954, he had passed Vance and Lyons (and rightfully so!), but still had to wait for three more beloved old-timers.

That raised him to the top of the non-inductees, which meant he would have been a lock in 1955, since there were no significant new additions to the ballot, but he ran into a snag:

Phase 4: Between the 1954 and 1955 ballots, the rules committee finally adopted the modern five-year waiting period. 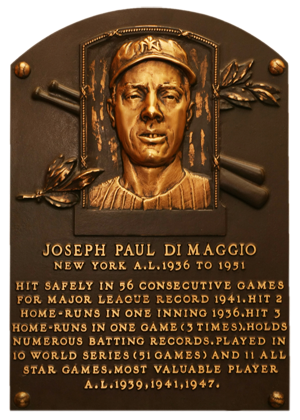 Unfortunately the new rule made Joe D. technically ineligible for the 1955 ballot since he had retired after the 1951 season. However a special provision exempted anyone who had been on previous ballots. Since Joe D. had already been on the 1953 and 1954 ballots, the five-year waiting period was waived in his case. Technically the waiver also would have applied to any others who had been on previous ballots, but DiMaggio was the only man genuinely affected. No other players who retired in the 50s were even close to consideration. In fact, The Clipper is the only guy in the Hall of Fame who played in the 1950s and was elected in the 50s. He remained the sole 50s man for seven more ballots, until Feller and Jackie Robinson made it together in 1962. Teddy Ballgame made it in 1966; Musial and Campy not until 1969. As of 1970, those were the only six players in the HOF who had played in the 50s, and DiMaggio had beaten the others by a mile.

So, to answer the original question, the eligibility committee respected his ability so much that they created a special "DiMaggio rule" just so he would get in immediately.


Needless to say, the voters also respected his talents. He sailed in when the 1955 ballots were cast.


Posted by Greg Wroblewski at 9:16 PM