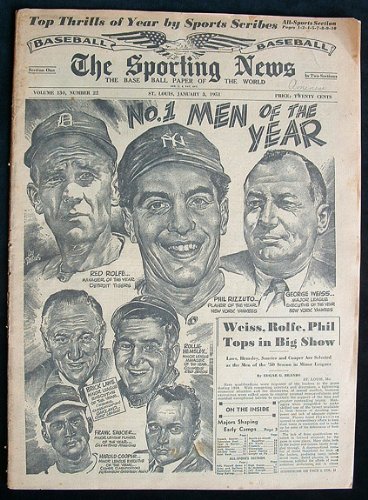 On January 3, 1951, Frank Saucier was on the top of the world. He was not only a happy newlywed, but was also on the cover of The Sporting News, right there with the ol' Scooter, Phil Rizzuto. In fact, TSM dedicated a detailed two-page article to him.

Huh? Who the hell is Frank Saucier?

Saucier had been the minor league player of the year in 1950, so he made that year's "best of" list, which TSN traditionally published in the first issue of the following year. Rizzuto, of course, had taken the major league version of the same honor with a season so impressive that he had taken American League MVP honors over his powerful teammates Berra and DiMaggio, each of whom had driven in more than 120 runs. That may sound odd to you by today's standards, but the Scooter was perhaps the most highly respected player in the game in those days. The previous year he had finished second in the MVP balloting, and had given the great Ted Williams a run for first, despite the fact that Williams had won the triple crown while drawing 162 walks, and Rizzuto had batted .275 with an anemic OPS+ of 88.


Saucier earned his spot beside Rizzuto by winning the Texas League batting championship with a .343 average. It was the second consecutive minor league batting trophy he had won, and it almost seemed like a letdown after his astounding 1949 season in the Big State League for Wichita Falls. That was one of baseball's best-ever minor league seasons, in which he posted a batting average that looked like a typographical error (.446), while toiling as a catcher! The year before that, he had managed a mere .357 in the Illinois State League. All told, he accumulated a lifetime minor league batting average of .380.

Saucier had never been a stranger to success, in or out of baseball. He had always been good at a lot of things. Back in high school in Washington, Missouri, a town on the Missouri river about an hour's drive west of St. Louis, Saucier had been much more than a jock. He was so gifted at academics that he graduated at 16. That happened during WW2, so his next stop was the U.S. Navy, which placed him in the V-12 program, an accelerated officer development course which led him from Westminster College to midshipman's training at Notre Dame. The Navy's policy at the time was that nobody could be commissioned before turning 19, but Saucier's C.O. was sufficiently impressed to waive the requirement, thus making Saucier an ensign at the tender age of 18. He served his time in the Pacific theater, then was placed in the reserve when Japan surrendered. The full story of Saucier's participation in the Navy V-12 program is summarized in the following article from his home town newspaper, which also includes pictures of him in 1943 and 1993. 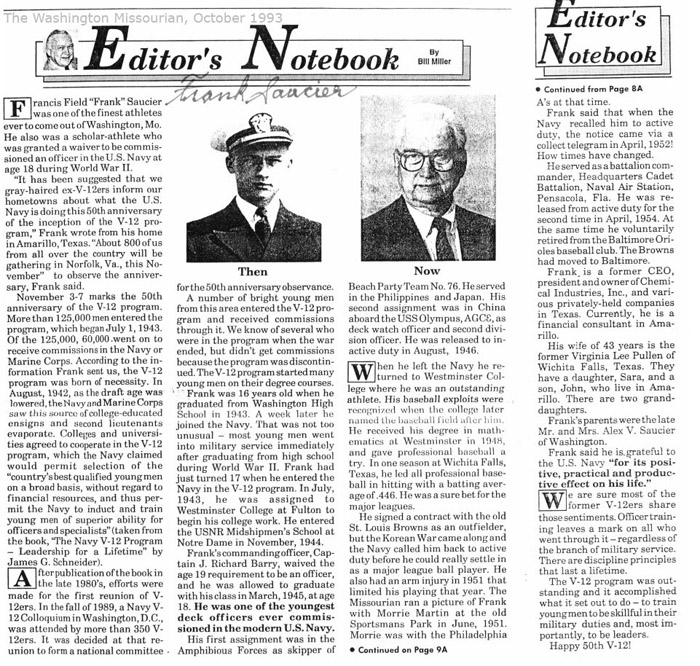 By releasing him from active duty, the Navy allowed Saucier to finish his university education at Westminster, which he did with a bang. In the academic realm he earned a math degree, while on the baseball field he batted .519 in his junior year, a conference record. He left such an impression that the school named the baseball field after him.

His gaudy numbers on the college circuit came to the attention of professional scouts, and he landed a contract in the farm system of the St Louis Browns. After three brilliant seasons in the minors he won a spot on the cover of The Sporting News that began this tale.

After his incredible college and minor league career, Saucier was offered a major league contract for 1951, but he was not happy with it so he held out and refused to report to the Browns. Most ballplayers in those days had no viable options, but Saucier was a brilliant guy, a college grad, a naval officer, and already a successful businessman from his off-season ventures. If baseball wasn't going to treat him fairly, he reckoned that he was going to drill oil wells. On April 17, 1951, he was placed on the suspended player list for failing to report and sign a contract. Shortly afterward, he came more directly into the sights of baseball's legendary rascal of an owner, Bill Veeck, who was in his first year as the owner of the St. Louis Browns franchise and was at the time desperately trying to resuscitate it. Veeck was known for brilliant promotions spiced with acerbic humor, and for finding ever more inventive ways to market his perennially inept Browns, who were inexorably falling farther and farther behind the storied Cardinals in the hearts of the city. One thing he was not going to let slip through his fingers was an Eastern Missouri boy who also happened to be the best damned prospect in baseball, and of whom The Sporting News had said, "If the Browns can get by for a couple of years and not part with Saucier, they may come up with the greatest individual drawing card they've had since George Sisler." That was music to Veeck's ears. On July 4th of that year, he got in his car and made his way to Saucier's living room, where the two men were able to come to terms on a win-win deal after five hours of face-to-face negotiation between one and six in the morning. Veeck was finally able to add his promising local boy to the Browns roster, while Saucier got both a big league shot and $10,000 to help expand his oil interests. That was a substantial sum in 1950, equivalent to some $100,000 today.

Saucier's story then takes a dark turn as, for the first time in his life, he had to face true frustration and failure. His talent was still with him, but he had not attended spring training and had not been practicing, so he tried to do an accelerated training program to get back into baseball condition. The intensity of his work-outs caused him physical problems. He injured his throwing arm by trying to rush it back to full strength, and he developed severe blisters on both hands from taking three to four hours of batting practice each day. In one of Saucier's early games, the Yankees catcher, Yogi Berra, informed the ump that the young man's hands were bleeding while he batted. For obvious reasons, Saucier's manager decided to use him sparingly until his arm and hands could heal.

At that point Bill Veeck had concocted for the Browns' season an operatic plot twist, in which Saucier was to play a minor but critical part. Veeck informed the Washington Missourian, Saucier's hometown newspaper, that their favorite son would be starting the second game of a double-header against the Detroit Tigers, prompting busloads of Washingtonians to attend the games that day. Saucier was puzzled by the move, since his manager and his teammates knew that he simply could not throw a ball overhand. He was even more mystified to find himself starting the game in right field, where he would have to make even longer throws than he would from in his usual place in left. The Browns survived the first inning without allowing a hit or a run, which brought them to bat with Saucier scheduled to bat leadoff.

Saucier was sent back to the bench, replaced by that legendary slugger Eddie Gaedel, ol' number one-eighth.

Gaedel is listed in the baseball encyclopedias as a 3'7", 65-pound pinch hitter who batted right and threw left. I'm not sure how they determined which hand did the throwing because this plate appearance represented his only major league action.

Having been blessed with a rather tiny strike zone, the little guy drew a walk on four pitches and ambled toward first base, soon to be replaced by a pinch runner, but not before tipping his cap and bowing a few times toward the adoring crowd (left; click to enlarge).


Eddie's part in the story has been covered thoroughly elsewhere. He would go on to die young, tragically beaten to death. The only happy side of his tale is that his grand-nephew Kyle is now (2015) playing pro ball for the San Antonio Missions, the same team Frank Saucier played for when he won the Texas League batting title so long ago. 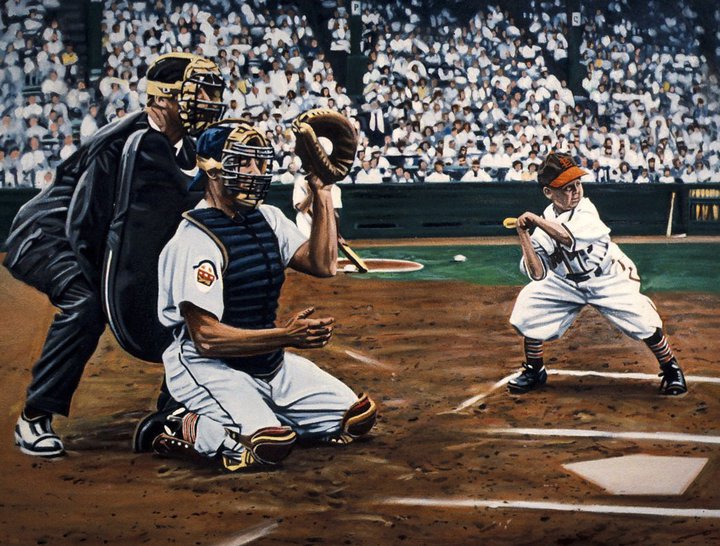 The story of the tiny batsman didn't end that Sunday, but a day or two later when Will Harridge, the president of the American league, banned Gaedel and established new contract-approval processes to ensure that his office would have time to prevent any further gimmick contracts from slipping through the cracks. Veeck responded with his customary iconoclastic wit. He speculated that if Gaedel had been banned for being too short, then perhaps Harridge should also ban Phil Rizzuto, but if Gaedel was being banned because his batting represented unfair competition to the rest of the league, then perhaps Harridge might consider banning Ted Williams as well. Gaedel also seemed to be playing along with the joke. He publicly excoriated Harridge for ruining his chances in baseball, and carped that it was his ill fortune to have this happen during an interregnum between commissioners, meaning there was nobody to hear an appeal. That would have been funny material, except Gaedel wasn't kidding.


Above left is the original AP report of the incident, as published on August 22nd, 1951 following Harridge's action. Click on it to read it in its full size.

As for Saucier, his vast potential was never realized. He finished the season, and his career, with 14 at bats and a lifetime average of .071. He was used primarily as a pinch runner for the rest of the 1951 season, but he was healing and fully intended to report for spring training in 1952. Unfortunately, the United States had managed to get embroiled in yet another major combat action, this time in Korea, and Saucier was still a reserve officer, so the Navy called him up. Bill Veeck could pull a lot of strings and call in a lot of favors, and by all accounts he tried to do something for his star prospect, but even the wily and calculating Veeck could do nothing to influence the U.S. Navy, so Saucier spent another two years on active duty. By the time he was discharged in April of 1954, he was about to turn 28 and was already late to begin spring training with everyone else. At that point in his life, having spent a lot of time away from his young wife, he didn't see how the nomadic baseball life could provide the correct career path for him, so he returned to the oil fields and eventually became a CEO.

Because Saucier was a potential baseball superstar who should be remembered for more than being the only guy pulled for a 3'7" pinch hitter, a prolific and thorough baseball blogger named Bob Lemke took the time to look back on what might have been for Saucier, and to create the baseball card he was never issued, formatted in the style of the 1951 Bowman set. 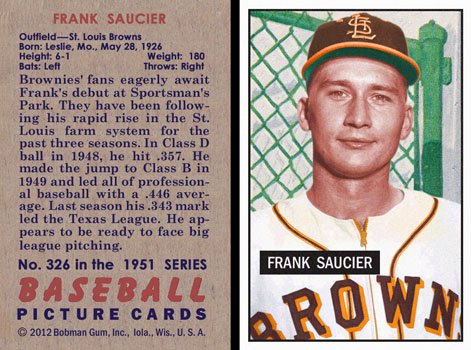 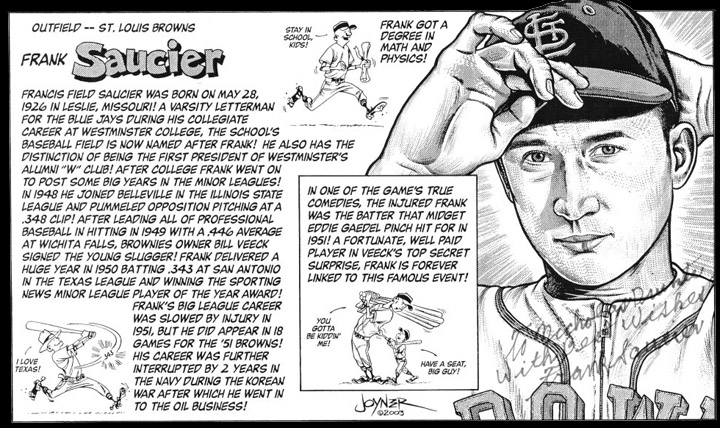 Posted by Greg Wroblewski at 11:31 PM