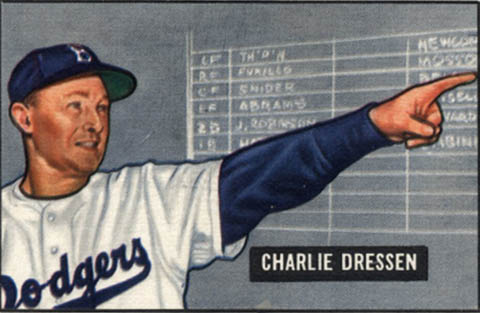 What few people realize is that manager Chuck Dressen was the one who blew that pennant for the Dodgers. In the three-game playoff against the Giants, Dressen did not give a single start to his 22-3 pitcher, Preacher Rowe, who also had the club's best ERA and had thrown 19 complete games, including four complete game victories in September. Instead he gave a start and a key relief appearance to Ralph Branca, who lost both of the team's playoff defeats! During the season, Branca had been a mediocre 13-12 for a team that won 97 games, and had completely fallen apart in the last month of the season. Presumably Dressen did not want to start the left-handed, soft-tossing Rowe against the Giants, whose best hitters (Thomson, Mays, Irvin, Dark and Stanky) were all right-handed. But that logic tends to fall to pieces in light of the fact that Rowe had pitched in four games against the Giants that year, and the Dodgers had won three of the four, losing only in a game in which they were shut out by Sal Maglie, which was hardly Rowe's fault.

Another 1951 mystery was Dressen's decision not to warm up Preacher Rowe in that key situation in game three. 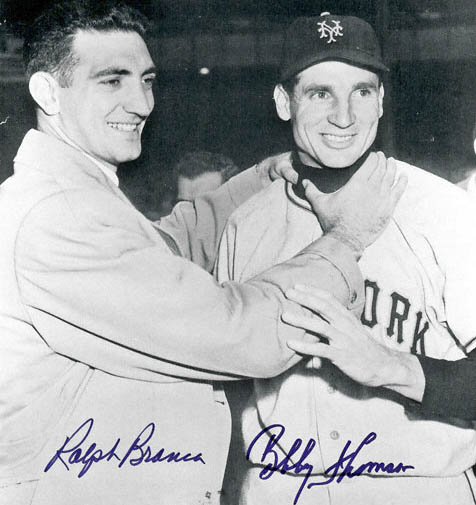 Statistician Allan Roth knew that Roe was a better bet than Branca, but "Dressen didn't want to see it," Roth told author Lee Heiman. "He made little or no use of the information I provided. The man didn't want help from anybody. He thought he could do it all by himself. It's always been that way with the big ego managers. They couldn't believe a statistician sitting in the stands could give them information they didn't know themselves. So Charlie ignored me."

Even after deciding on Branca, Dressen missed one more strategic move. With first base open and one out, he should have walked red-hot Thomson to pitch to callow 20-year-old Willie Mays, who had struggled against Branca that year (.105 with no RBI), and was cold in October (one for ten). This also would have kept the possible double play intact and set up a force at any base. But Dressen was not exactly Tony LaRussa in the analysis department, and made every possible miscalculation.

If not for Dressen's bungling, Bobby Thomson, although a solid player, would be remembered only by baseball geeks. As it stands, his name will be known to every serious fan for as long as men remember baseball itself, for the moment on October 3, 1951 which is enshrined in the video below. 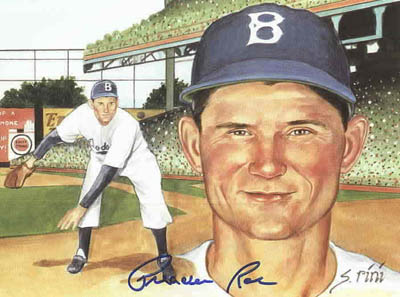 Preacher Roe's 22-3 record in 1951 wasn't really some kind of fluke. He pitched seven years for the Dodgers and finished with a record of 93-37, for an incredible winning percentage of .715. In the five consecutive seasons when he started at least 24 games, his WORST season was 19-11.